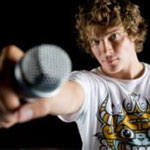 Upon walking into Umbrella Revolution to see powerhouse hip-hop outfit Tom Tom Crew, you are put in the right frame of mind immediately.  The theatre is buzzing with energy and attitude, creating a sense of anticipation that is palpable.  It has you well prepared for a variety show of an entirely different kind when the Crew hit the stage.
For most, it will be a completely new experience.  One hour crammed with big acrobatics, DJ battles and some of the most insane beat boxing you’re ever likely see performed live.  Regardless of whether you’re an avid fan or wholly unfamiliar with hip-hop culture, it’s chocolate for your eyes and your eardrums.
Ben Walsh is charismatic and fun, nailing his role as MC.  His break-neck drumming sets seem slightly out of place but are high-energy and impressive.  DJ Luke Dubs gets the crowd bouncing with live mixes, while the aerial stunts of the acrobatic team elicit foot stamping from the audience.
Stealing the show is street artist and beat box extraordinaire Tom Thum.  The pitch perfect, multilayered sounds he can produce with just his mouth and a mic boggle the mind.  It has to be seen to be believed, and we highly recommend that you do.
The show does feel a little unbalanced, with the energy dropping a notch too far at some points.  More of the acrobatic interludes that had so much impact at the show’s beginning would sustain the vibe and keep the crowd pumped for longer, though this is just “finishing touches” stuff.
It’s a supremely entertaining show, akin to The Dhol Foundation on speed.  You’ll struggle to wipe the smile off your face on exit.
Nicole Russo