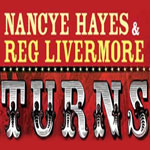 Her Majesty’s Theatre. Nancye Hayes and Reg Livermore. April 4 to 16.

How to review this production? Let’s start by saying I enjoyed it, however I suspect I don’t speak for most of the audience in saying so. A handful walked out before the final curtain, and those who hung around commented that it was incredibly difficult to get into it.

So what did I like about it? In a nutshell, it was charming. Albeit slightly self indulgent, I found it to be delightfully entertaining. Reg Livermore has written this music-hall, vaudeville, cabaret, pantomime specifically for himself and Nancye Hayes. The premise for the show is great. Its construction and execution however, is flawed, leaving the audience asking ‘what for?’ and expecting more from the characters.

Hayes plays Marjory Joy, and ageing mentally ill daughter to a famous murdered mother, who is now suffering from Alzheimer’s disease and believes herself to be the forgotten star. Her son Alistair both struggles with her illness whilst subsequently participating in her delusions (a complicated plot point to grasp in the early stages of the production). Alistair’s own issues, pushed to the side while he cares for his dying mother, are revealed in a very weak, almost pointless climax at the end of the show. It turns out, for no apparent reason that he is a cross dresser.

Scripting weaknesses aside, the set by James Browne was very fitting, working with a revolve, three different locations were easily established. Director Tom Healy has these two consummate performers working at their absolute best. Hayes sings, dances and hams it up like a true star of Australian theatre, Livermore is individually quite strong but shadowed by Hayes' enormous talents.

So would I recommend the show? I can only answer this question with consideration for my audience. If you have been around theatre for years, know and love these stars, and are looking for an evening of interesting story telling, reminiscing and a few laughs – then check this out. If this doesn’t sound like you, stash your pennies, the Adelaide Festival Centre has a lot on offer this year that might be more your cup of tea.