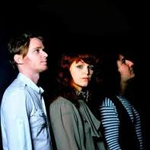 TinPan Orange have been busy on both the touring circuit and the festival circuit. The very first time a Your Take Sessions crew member saw them was at Woodford Folk Festival earlier this year when they played to thousands of people under The Grande tent. When you listen to this song, you can see why they appeal so much to anyone.

Even though the band had been travelling since 4 am and were seriously sleep deprived, they took some time in their arvo to chat with Your Take Sessions about their up and coming album and then spin us one of the tracks that will probably appear on it.

More YourTakeSessions on You Tube.