Waiting For My Real Life 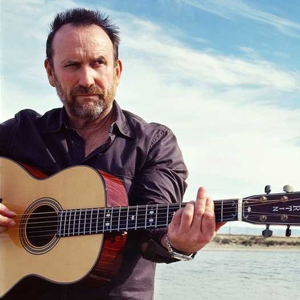 With ‘Waiting for my Real Life’, Colin Hay is here to tell his story for himself. It is June and Friday 13th - an auspicious date in more ways than one. Forty seven years ago to the day, in 1967, Colin Hay aged fourteen, arrived in Melbourne with his family – emigrating from Kilwinning in Scotland.

On stage in “Mr Dunstan’s Playhouse”, dressed in a raffish red tartan jacket, his receding hair still spiked in punkish tufts, Hay is immediately engaging as, setting up a likeable riff on his acoustic guitar, he begins to bind his storytelling spell. With his tangy Scots accent he talks about his early experiences in Australia and his formative influences - first in his father’s music supplies shop in Scotland, then as he begins to build a reputation as composer and front man for Men at Work, one of this country’s most rapidly successful international acts.

Drawing from his eleven solo albums and the meteoric three recorded with Men at Work between 1981 and 1985, Hay, in grainy good voice sings the title song from ‘Wayfaring Sons’ (“Don’t go out in the night”) then a slower tempo, almost ballad version of ‘Who Can it Be Now?’ and his laid-back homage to the beach life – ‘Beautiful World’.

Of course, his waggish humour and sardonic take on the world steers his commentary from tales of a friend being chased by a shark as prelude to ‘Beautiful World’ to self-deprecating anecdotes of mistaken celebrity. Those “didn’t you used to be…?” encounters: In that band that recorded ‘YMCA’? In the ‘Flock of Seagulls’? In the group that sang ‘Turning Japanese’?

There are dozens of stories and they are fun to hear - the Aussie Scots outsider at the Grammys, momentarily meeting Little Richard, then later as a soloist, getting to know Zach Braff, the creator of the TV series Scrubs - in which Hay (an occasional film and TV actor) appeared several times - and director of the movie Garden State, with its highly successful soundtrack which included Hay’s song ‘I Just Don’t Think I’ll Ever Get Over You’.

Needless to say ‘Down Under’ is a mine of jokes and reminiscences – although the bitter “Kookaburra sings” copyright infringement case is not among them. “We wrote this song,” is his only comment, “whatever you might have read.” He has stories about performing at the Sydney 2000 Olympics, of playing solo in Brazil, where he has a strong following, of an international tour he had to cancel and all he had left was a box of t-shirts with his name misspelled – Colin Hat.

This was the first time I had seen Colin Hay play live, although his reputation as a raconteur has long preceded him. And it’s all true. He is a troubadour and storyteller who draws in an audience and conspires with them with wit and surprising candour. Hay talks about his battle with alcohol and how fellow heavy drinkers don’t want to take it seriously, he also talks fondly and reflectively about his parents and sings ‘There’s Water Over You’ as a tribute to his father.

From his 1994 album ‘Topanga’, he sings ‘Waiting For My Real Life Begin’, “Any minute now, my ship is coming in,” a meditation about expectations which he links to the strange phenomenon of rapid success and its equally rapid evaporation. It is hard-won wisdom and genially expressed. Colin Hay has found his real forte as a travelling singer holding an audience in the palm of his hand. Closing this excellent show, accompanied on his Gryphon 12 string, he sings ‘A Simple Song’ - and makes a very special talent look easy.