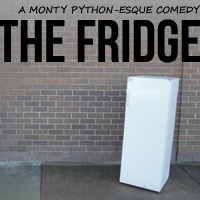 American comedian, W.C. Fields is famously quoted as saying, “Never work with children or animals”. Why, I’m not so sure, but after seeing The Fridge I’m convinced that a kid must have shown him up at some stage during his career. Featuring one of the best child performances since the film version of the musical, Annie (the first one), this self-described absurdist comedy really provides its otherwise adult cast with some formidable competition for the spotlight.

The storyline is as such: Doug Small (Andrew Eddey) is a struggling underachiever who is desperately trying to provide for his pregnant wife Florin (Linley Jenkins).  He’s a disappointment to Florin’s sister Sugar (Casey Elder) and Grandma Olive (Hannah Baker), but is content in his marriage.

When his boss, Manager of Barracuda Bank, Ted Bighorn (Remy Graham-Throssell) fires him from his steady bank job because of a twisted obsession with Florin, Doug finds himself on the verge of eviction from his Eastern European landlady and in competition for his wife’s affection.

Having also just lost a perfectly good fridge to incompetent and unqualified tradespeople, Doug heads down to the dole queue to scrape some money together to get him, Florin and his housemate Stevo (Hagen Marsh-Brown) out of trouble. It just happens that on this particular day he is the lucky millionth customer, receiving, among other tokens, a second hand fridge.

It soon becomes apparent that this is no ordinary fridge, but rather the most unlikely answer to Doug’s problems, when he opens it to find it has produced a rare element in the shape of an egg worth a fortune on the market. When Doug cottons on to the value of the mineral he meets with Barracuda Industries mining magnate (Elaine Noon) and her Bank Manager Mr Bighorn to do a deal, only to be swindled mercilessly by them.

Luckily, the Fridge has also sent with it a business savvy munchkin called Carson Forbes (child actor Daniel Minns), who is on community service in his faraway land and has come to assist Doug in being financially successful. After giving some dubious advice and motivation, Doug sets out to make a better profit on his proverbial goose’s golden eggs.

However, in doing so Doug becomes obsessed with the potential wealth the fridge is capable of producing. Furthermore, when it is stolen and held for ransom by Mr Bighorn, Doug goes to great lengths to reclaim it, only to lose those closest to him in the process. But it is only when he makes the ultimate, gruesome personal sacrifice for the fridge that he realises he has gone too far in his quest for material abundance.

Drawing on inspiration predominately from Monty Python, The Fridge also has recognisable features from other British comedies, such as The IT Crowd. As such, the characters initially started out with accents spanning the United Kingdom, however, these were noticeably inconsistent and it was difficult to tell exactly which nationality the cast was representing at any given time.

However, what this production lacked in identity, it made up for in laughs, with Daniel Minns hands-down stealing the show. Highly adept at the business of being funny, the little cherub was nothing short of a comedic prodigy and had the audience completely disarmed the moment he tumbled out of the fridge. Remy Graham-Throssel also upped the stakes with his portrayal of the smarmy Ted Bighorn, committing entirely to the role and delivering some cracking one- liners. He and Andrew Eddey also bounced off of each other nicely as archenemies, engaging in some very memorable capers throughout the evening.

While the remaining cast members (including Casey Elder and Hannah Baker) were highly entertaining in their multiple roles, it seemed as though the British humour didn’t translate as well through them. While many people across the globe appreciate this kind of comedy, I’m guessing it’s not quite as easy to reproduce it faithfully if you didn’t grow up in that particular context. Rather, it seemed the British humour shone though intermittently like the sun on a cloudy day, with their innate Australian-ness proving too entrenched to supress and too much of a mismatch to acquiesce.

The frugal set design by Chris Brain was one of innovative simplicity, consisting almost entirely of cleverly fashioned recycled cardboard – including many of the props. The use of plastic bottles and creative lighting (by Samantha Pickering) to create the illusion of an aquarium was delightful, and it was good to see some eco-friendliness in a theatre production.

Though borrowing ideas from a range of sources, The Fridge in itself is a bold and imaginatively written play that pulls you in and keeps hold until the outrageous end. Just from observing the audience, who were in absolute stitches throughout, you could tell that its execution really scratched the itch of many people attending that night. While this soufflé didn’t quite rise to its full potential, it was nonetheless still pretty tasty.