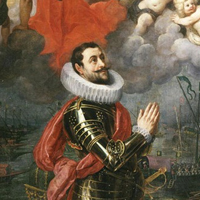 Music academics and writers Carolyn Abbate and Roger Parker remark in the introduction to their most excellent and recently published history of opera that “opera is in many ways the most extraordinary artistic medium of the last four hundred years.  Prohibitively expensive and patently unrealistic, it can never the less paint the human passion with astonishing power and drama.”  This certainly sums up ‘La Forza’.  The plot comprises an astonishing and improbable sequence of chance events and each is narrated with deeply emotional music and heartfelt arias that plumb the very depths of what it is to be human.

State Opera CEO and Artistic Director Timothy Sexton has commented that this is “one opera where you simply cannot compromise on the quality of the singing”, and he is right.  ‘La Forza’ is indeed a force.  It is big and it takes no prisoners, and it was disappointing that talented soprano Nicole Youl was not sufficiently well enough to complete the opening night performance and had to retire after Act 2.  Her understudy, Lecia Robertson, however was excellent!

This production of ‘La Forza’ is another Opera Conference production, and it sets a new benchmark.  The production values are first rate.  Mark Thompson’s design is inspired.  The giant skull centre-piece and the skull-masks worn by the shrouded members of the ensemble make it clear from the very start that death is in the cards of the central characters.  When it doubled as a hermit’s cave in Act 4, replete with a giant sized figure of the crucified Christ suspended above it, the skull became Golgotha and the imagery was palpable. Nigel Leving’s lighting design was brooding and gave the entire production a foreboding mood. Excellent use was made of strobe lighting during the battle scene, but the staging of the fighting perhaps bordered on being languid.

The male dominated cast was commanding and handled the weighty Verdi score with apparent ease.  David Parkin injected an almost foppish wit into his portrayal of the Mayor, and Bernard Hull, Jeremy Tatchell and Kate Bright amply demonstrated that smaller roles can also have substantial impact.  Steven Gallop made for a hateful father and gave ample excuse for his daughter, Leonora, wanting to flee his household.  John Bolton Wood was excellent and very nearly a scene-stealer in the (almost) buffa role of Fra Melitone.  Milijana Nikolic was cool and calculating as the fortune telling gypsy Preziosilla and added chill with her smooth mezzo line. Despite underplaying his character on occasions, Rosario La Spina’s warm tenor voice injected human warmth into situations that were crying out for it.  Pelham Andrews was perfectly suited to the role of Padre Guardiano, and his bass voice, which is already a fine instrument, is becoming silkier and silkier.

The standout of the evening was Michael Lewis who played Don Carlo with malevolence and single-minded purpose.  His sonorous baritone voice was as clear as crystal above the orchestra and he knows how to act.  Bravo.

Maestreo Andrea Licata extracted every beautiful melody that the score offered and never laboured the gravitas.

This was an exciting production, which left me feeling that opera in Australia is in very safe hands.

When: 12 to 19 Oct
Where: Festival Theatre
Bookings: bass.net.au