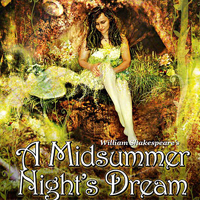 As far as ideal conditions for a production go, it seemed as though the planets were perfectly aligned for opening night of the Queanbeyan City Council’s A Midsummer Night’s Dream. As in the beloved play, the full moon shone brightly outside this evening and a keen audience braved the sub-zero temperatures to pack out The Q Theatre. With a dream cast and the direction safe and snug in Jordan Best’s hands, there was no way this production was going to be anything but enchanting.

Being one of Shakespeare’s most popular and well-known works, I will refrain from summarising the plot. Best has stayed loyal to the original version, resisting the temptation to imprint the plot with a contemporary bent like so many have done (to great effect) of late. In fact, the only real branding was the opulent, circa 1930s costume design by Cate Ruth, Emma Sekuless and Miriam Miley-Read, playing no small part in the luscious aesthetic quality of the overall production.

The minimalist, yet innovative set design by Wayne Shepherd provided a splendiferous forest backdrop for the cast’s frolicking. The use of the white cylindrical floor to ceiling curtains allowed enormous creative potential for Owen Horton’s ethereal lighting design; an opportunity that he utilised to maximum effect. Likewise, the original music by Peter Best complimented the subtlety of the set, providing a dreamy soundscape in which to lose yourself.

Of the Athenian cast, Jenna Roberts as the lovesick, rejected and slightly unhinged Helena set the bar extraordinarily high and was a display of comedic excellence. Reminiscent of a young Jennifer Saunders, Roberts radiated Helena through every pore and balanced her essentially daffy character with some charming warmth and depth. Rachel Clapham as Hermia, Duncan Driver as Demetrius and Chris Zuber as Lysander played off of Roberts’ slapstick beautifully, holding their own in the comedy stakes with some priceless moments of raw hilarity.

Another noteworthy comedienne, Erin Pugh (who proved herself highly capable in a leading role in Imaginary Invalid), seemed to be having a ball in the role of the awkward and bashful Moth, providing the laughs in a much more understated fashion. Dave Evans as the gleefully mischievous Puck was everything you would expect of the Fairy King’s wingman; fleet footed and physically nimble, with a relentless and wondrous sense of enthusiasm. Adorned with exquisitely designed supernatural garb by Mia Ching and Ann McMahon, Alison McGregor was the embodiment of regality in her role as the Fairy Queen Titania. Likewise, Tim Sekuless as the Fairy King Oberon was a strong and commanding stage presence that validated his position as the story’s scheming orchestrator.

And of course there is the rag tag bunch of aspiring actors that were The Mechanicals. As the play instructs, Nick Bottom was to steal the show, and Cameron Thomas did this with gusto. However, there was plenty of room for the talent’s of the fellow mechanicals to shine, with Brendan Kelly (as Francis Flute) taking full advantage of this with his brilliantly executed delivery as the maiden Thisbe. The troupe’s finale, while performing to the Athenians, was absolute gold, and I doubt vey much that the Athenians giggling at stage right was entirely scripted.

There was absolutely nothing about this latest production of A Midsummer Night’s Dream that I didn’t relish. While all the comedic subtleties were lovingly drawn out and given the respectful attention they deserve, no creative liberties were required and it remained true to Shakespeare’s enduring words. It wasn’t until the end that I realised exactly how much this play had drawn this unwitting observer in to its magical world, well and truly completing its mission in blurring the line between dream and reality.

When: 24 Jul to 3 Aug
Where: The Q Theatre
Bookings: theq.net.au