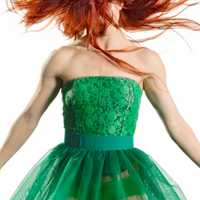 I couldn’t think of a better place to be than at the Canberra Theatre Centre on a cold and drizzly Canberra evening to see the Australian Dance Theatre’s much anticipated take on the grande ballet that is Giselle.

However, as a contemporary dance production, this isn’t just your classic, run of the mill interpretation of an artistic staple – this is a gritty, off the wall version with some serious attitude.

As the paring back of the name would suggest, G is a modern deconstruction of the original. Rather than relaying a blow by blow account of Giselle, the Australian Dance Theatre have opted for a highly truncated version by instead distilling its essence and placing a spotlight on the emotional undercurrents of the story.

This approach has the potential to be unbearably abstract, however, it is countered by the innovative use of a LED backdrop that features as both narrator and a vivid, mercurial centrepiece of the production. But even the narration is broken down to its most simplistic form, transforming a somewhat complex story into tabloid form.

On that point, G does seem to echo the style of today’s entertainment media such as gossip rags or music videos. It possesses the same intense, reductive and hyper real qualities, making it easy to absorb, but in this particular medium (modern dance) where it is often difficult to maintain the audience’s interest, it works a treat.

Moving at a thrilling pace, this was achieved by what is best described as a conveyer belt effect. The dancers for the most part rapidly migrate across the stage as though on a continuous loop, acting out the digital story as though in fast forward and building up the intensity of the melodrama unfolding.

Within the frenzy of activity the roles were seemingly interchangeable, with an echo effect where shadows of characters were spawned with multiple interpretations of them playing out at once. This had the potential for confusion, but the precision and efficiency of the choreography, alongside the collaborative teamwork (including some stunning duets) on stage meant that unintended chaos was easily avoided.

Simultaneous to executing this intense choreography each dancer emphatically radiated a rollercoaster of emotionally confronting, steroid injected theatrics that served to represent the core themes of Giselle – successfully managing to both disarm and infiltrate the psyche.

The bold colours of G were integral to the overall visual aesthetic, with a vibrant and invigorating, signature emerald green predominant throughout in both the costuming and lighting.

The style of costuming was also relaxed, with the men in tracksuits and the women predominately in simple halters and tutus. Both wore pedestrian hairstyling, easing the stiff formality of classical ballet into something entirely fresh and approachable.

The electronic score composed by Luke Smiles all but ignored the traditional music of Giselle, allowing only a hint of the original to seep through the otherwise edgy and industrial soundscape. Combined with a distorted, hypnotic repetition, this served to keep the heart racing and the mind alert to the mardi gras of visual stimulation.

G is modern dance for a new generation; it offers the relentless stimulation to which they are accustomed with all the associated bright lights and obtrusive noise. However, just like a music video there is enormous skill and talent involved to create this effect, and the extraordinary creative process that led to the final product is highly evident. This is one intense ride that literally finishes with a bang!