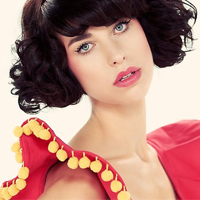 The first stop on Kimbra's latest country-wide jaunt, Adelaide was a test case for a tour that sees her upgrade from pubs and clubs to capital cities major venues.

Having chosen the likes of The Gov on previous visits to our fair city, one acquired their tickets for this gig with some trepidation.  A non-capacity crowd in a venue as notoriously soulless as Adelaide's Entertainment Centre can make-or-break even the greatest of shows.

Dispelling any negative expectation, Kimbra kicked this one out of park from the word go as she filled the cavernous space to the brim with sound and energy.  Armed with a tambourine and dressed in a fabulous Bjork-esque number that makes you think "where does one acquire such an outfit?", Kimbra bounced on stage to greet the crowd, immediately igniting  the atmosphere and receiving an equally excited response.

Showing herself as a massively high energy and friendly performer who readily connects with an audience, Kimbra covered the length and breadth of the stage as she danced and sung up a killer set.

The band easily filled the area, with keys, guitars, drums plus two male backup singers garbed in tie-dyed ponchos.  Three pictured framed screens provided backdrop visuals for much of the performance, featuring the accompanying video clips for many of the numbers. The show benefitted from a great sound mix by the EC team, who kept the vocal and instrument levels well balanced throughout.

Powerful, emotional and expressive, Kimbra manages to appear incredibly strong onstage and yet fragile at the same it. With alabaster skin and gorgeous pins, she cut a mesmerizing, doll-like figure under the shifting stage lights.  The mid-set outfit change to a fun, equally crazy red number further showed off not only her figure but also her ability to change dresses faster than most girls can change socks.

Kimbra’s voice is as strong and impressive live as it is recorded.  Combined with her interpretive movement and stage presence, you are reminded of the likes of PJ Harvey and Bjork. She belted out a set list to please, featuring all the tracks currently receiving heavy rotation on the major stations including Good Intent, Settle Down and Two Way Street.

She padded out the hits with quality album material and collaboration tracks, such as Warrior, written with A-Trak and Mark Foster.  The super funky and brand new Come Into My Head closed out the main set.

With the addition of more instruments to the stage as soon as the last song rang out, there was no question of an encore - as if there ever really is!  She invited Sam Lawerence back on stage to join her for Wandering Limbs, and then followed with the full band for crowd favourite Cameo Lover.

An awesome show that surpassed all expectation, Kimbra is a spectacle worth witnessing.

You’ve got another chance to see the lady herself in Adelaide this year when she graces the stage of this state’s newest festival, Spin Off, in its inaugural showing on July 21 at the Showgrounds.  Featuring some of the international cream from Splendour In the Grass as well as local Aussie acts, it’s a great consolation prize if you’re missing out on the country's largest winter music festival.