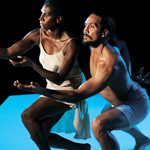 In some pockets of Australian society, Indigenous people are often mis-perceived as belonging to one big, albeit dispersed, monoculture. Belong debunks this logic in more ways than one.

The show consists of two acts; the first one ‘About’, is choreographed by Thursday Islander Elma Kris, who touched on the influences of different environments in shaping Indigenous cultures on the Australian mainland and the Torres Strait Islands in a pre-show forum.

Kris’s unique island heritage is the inspiration for ‘About’, which is a five-part story around the four seasonal winds which narrate the lives of saltwater people, and which they intimately understand through knowledge passed down to each generation.

Setting the scene for ‘About’ is the strikingly bold yet elegant elemental set designs of Jacob Nash, self-described as both cutting edge and traditional.  The design beautifully transports the dancers through the seasons, languidly acquiescing to the whims of each mood of the island winds, utilizing both contemporary and customary dance as well as narration in traditional dialect.

The second act ‘ID’ is an enthralling mix of multimedia, vignette, and dance, choreographed by Stephen Page, a main-lander from Brisbane and Artistic Director of Bangarra. ‘ID’ explores how traditional culture connects with modern Indigenous identities through the themes of Initiation, Caste, Totems, Discrimination and Kinship.

The transitions from one theme to the next are as beautifully fluid as the strong and graceful dancers, with each formation within the choreography well crafted and tightly performed. The dancers negotiate a broad range of moods, identities and styles of dance effortlessly.

Again, Jacob Nash’s set design is captivating, with the Totem themed set exceptionally stunning. There is just the right balance in ‘ID’ between creative and effective visual stimulation and simplicity to give the audience space to absorb the message of each story. The score is also masterfully utilized as part of the show, adding subtle splashes of comedy, tragedy, drama, romance and spirituality throughout.

Belong is yet another great offering from Bangarra Dance Theatre, and most certainly earned the rapturous applause from the audience at the packed Canberra Theatre Centre when the curtain fell – this is a cultural and artistic experience not to be missed.

Belong is playing at the Canberra Theatre Centre on 3 September
The Merrigong Theatre Company @ IMB Theatre, IPAC in Wollongong from the 8 – 10 September
And the Melbourne Playhouse Theatre @The Arts Centre from the 15 – 24 September