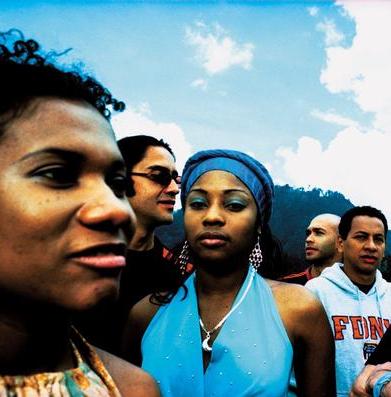 One of the best kinds of moments you can have at a festival is that of discovery.  To Adelaide's supreme good fortune, discovery is what WOMADelaide is all about.

On approach to the stage where Sidestepper was performing, you suddenly had no interest in wherever it was that you were going. This is one group with no need for a party in order to get started - if there isn't one, there soon will be!

A mix of electronic dub and dance with a heavy splash of Caribbean vibe, their music is irresistibly cool and will get a smile on your dial fast than you can holla "hell yeah!".  Drawing in rhythms from a breadth of influences, including hip-hop, Latin grooves, Columbian folk and dancehall reggae, Sidestepper had everyone on their feet and dancing up a storm from start to finish.  From what began as a modest crowd, their audience grew as passersby were drawn into the hi-tempo performance and others followed the sounds of the band and the cheers of their new biggest fans.  By its conclusion, the front of the Stage 3 was packed and pumping.

Oh, and trying to get a copy of their latest album La Buena Vibra Sound System from the WoShop after their set was a fruitless exercise - they were already sold out!