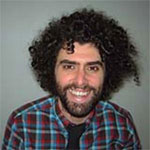 The Probability Drive – The Maths Behind the Lucky Country

This show was a pleasant diversion — a sort of entr’acte between other Fringe events you’re going to, a stocking filler if you get my drift!

Simon Pampena may or may not be a mathematician, but Prime Minister Julia Gillard has appointed him as a ‘numeracy ambassador’ and has charged him with the responsibility of revving up interest in young minds about what is often perceived to be a dull pursuit.  Simon Pampena combines mathematics with stand up comedy and the result is pure joy that has found its way from school halls to the Melbourne Comedy Festival and the Adelaide Fringe.

The plot of Pampena’s show is that Aussies (Oi! Oi! Oi!) love to be lucky, love to gamble, love barracking for the underdog, and love to do it all in the pub!  With this as the spine to his show—which is more substantial than many other stand up routines!— he blinds us with questionable statistics and logic and ‘proves’ to us why Australia (Oi! Oi! Oi!) is the most successful Olympic nation in the world apart from Jamaica, which has the fastest runners because the population is desperately running to escape being murdered!  (Perfectly logical—well, it was at the time)  He demonstrates a logical schema that will prevent St KIlda Football Club players from ever finding themselves in compromising situations ever again, and he nabs a poor unsuspecting soul from the audience and teaches them how to memorise the number ‘pi’ to umpteen decimal places.  ‘Pi’ was perhaps the least successful of his routines but his own recital of the first one hundred decimal places at break neck speed was reminiscent of the antics of the great Tom Leherer.  There was other stuff as well, and the whole event was entirely silly, but oh so much fun and a wonderful way to spend an hour.