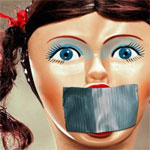 Written by playwright Clare McIntyre in the mid-1980’s, Low Level Panic focuses on the ruminations of three young female roommates, exploring their body image, sexual experiences and attitudes towards pornography and the portrayal of female sexuality
Jo (Maryann Boettcher) is obsessed with her appearance and struggling with confusing sexual fantasies.  Mary (Kate Englefield) is a victim of sexual assault who is appalled by what she sees as the tendency of all men to objective women.  Celia (Alicia Case) is a self-absorbed clean freak who struggles with the shared living arrangements.
In his program notes, producer Aaron MacDonald expresses a long-held desire to direct this show, an interesting admission given the subject matter.  He pre-empts the obvious question of whether a man could genuinely connect with a script written for and about women, by a woman.
This does not appear to have carried through to the final production, but if it had a greater issue would likely mask it.  The conscious “toning-down” of the script’s more aggressive feminist themes is noticeable.  While understandable given the chasm between women of the 80’s and today, it left the production lacking something, with characters that felt distant and not easy to connect to with.
The exception to this is Englefield’s solo work, where she owns her role and executes with very believable emotional conviction.
This piece is heavy going; it is dominated by repetitive dialog and the echoey venue sometimes made it difficult to hear and understand what was being said.  It was well executed however, with a clever set and a talented cast who performed brilliantly and with great professionalism in spite of a modest audience.