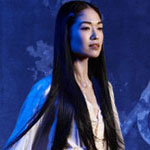 As the curtain raised on Madame Butterfly a beautiful painted scrim was revealed, delicately coated in petals, the lights come up behind the scrim to reveal Cio-Cio-San in a gorgeous flowing dress as light as a butterfly with four huge fabric wings extending out behind her, waving gently on the air.

This production of Madame Butterfly was originally choreographed in 1995 by Stanton Welch at the tender age of 25. Welch made a name for himself with this groundbreaking work which took the 1904 Puccini opera score and paired it with stunning choreography in an east meets west ballet triumph.

The 2011 Australian tour hails the return of Madame Butterfly after a ten year absence.

Designer Peter Farmer has taken one of the most spectacular sets ever built for the Australian Ballet and adorned the cast in Japanese Kimonos, chiffon dresses and three piece turn of the century suits.

The story is that of Cio-Cio-San and her doomed love to Lieutenant B.F. Pinkerton. The marriage arranged by Goro, a broker, is fated from the beginning as Pinkerton is already promised to another at home in America. At the fateful pinnacle Cio-Cio-San ends it all in a bloody and historically relevant climax, using the same sword with which her father suicided to take her own life.

There was some small synchronicity issues early in the first act, particularly between the two sailors, played by Andrew Wright and Ben Davis, however they individually danced beautifully and this could have been a one off incident.

Adam Bull as Sharpless gave some beautifully strong leg lines despite his very tall frame and Tzu-Chao Chou as Goro provided the most amusing characterization playing up the humor in his roll both choreographically and with fantastic expressions, his gorgeous Entrechat, incredibly high air jacks and Pirouettes were amazing.

Choreography was mostly well formed and easy to follow, though slightly confusing in act one when Pinkerton and Sharpless danced solo’s in juxtaposition to each other as their minds wandered to the respective girls, it felt awkward to see two un-connected pieces cross each other and looked slightly messy.

The use of fans was effective, though caution must be shown with positioning. Despite perfectly matching Port de Bras, fans were often askew, miss-angled, or half closed, destroying the effect. The arrival of the Geisha and introduction to Cio-Cio-San looked stunning, the four dancers each executing a controlled Devloppe as they rose from the fog cascading across the back of the stage.

The act one Pas de Deux was performed with absolute faith and trust. Not just beautifully danced, the emotional context was delicately portrayed by both Rachel Rawlins and Robert Curran in the roles of Cio-Cio-San and Pinkerton.

Rawlins showed so much freedom as she leapt into some complex lifts, Curran never looking strained or nervous despite their obvious difficulty.

Guest conductor Kenneth Young had the Adelaide Symphony Orchestra in fine form, displaying moments of tenderness in the orchestration with the subtlety of a fluttering butterfly.

One of the most beautiful ballets ever staged, the story is clear and choreographically linked so well to the score. A pleasing night of dance beautifully produced under the experienced eye of David McAllister.