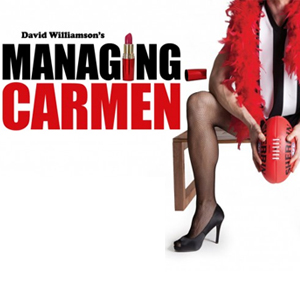 Although the AFL has been working hard to change its thuggish image over the last few years after a string of scandals, it still very much portrays a typically macho sports culture. With striking originality, ‘Managing Carmen’ explores the ‘shades of grey’ lying just under the surface of this carefully stage-managed theatrical production that we call ‘footy’ in Australia.

Brent (Jamieson Caldwell) is a highly talented but somewhat troubled football player who is failing to live up to his earnings potential as a brand ambassador due to his withdrawn demeanour. While Brent’s ruthless and belligerent manager Rohan (Brandon Burke) is doing his best to boost his image by supplying him with former model Clara (Annie Last) as arm candy, the devious sports writer Max (Trent Baker) is adding fuel to the fire by relentlessly targeting Brent in his gossip column.

Rohan decides to hire a therapist, Jessica (Hannah Norris), to determine what is bugging Brent and to unlock his ability to make some cash while he’s still at the top of his game. When she discovers Brent has a secret alter ego of the opposite sex, there is a mighty clash between the future of his career and the freedom to be who he really is.

The performers of ‘Managing Carmen’ were perfectly cast in their roles, with each of them bringing their own unique goods to the table.  Caldwell’s transition from the emotionally stunted Brownlow Medallist to the flamboyant Carmen was spectacular, while managing to avoid falling into the trap of being farcical. Burke as his cynical and irate manager was hysterical, especially when teamed up with his on stage nemesis Baker. The cleverly executed loathing between the two made for some brilliantly unbridled nastiness that had the audience in stitches.

Last and Norris in their diametrically opposed roles also held their own, with the magnetic Last (an accomplished comedienne, as seen in ‘When Dad Married Fury’) providing the big laughs as Brent’s flaky, self-centred sham girlfriend. Norris held the fort well as the only character with a semblance of emotional stability, and anchored the show nicely.

With a lot of ground to cover throughout the two-hour duration, the scenes of ‘Managing Carmen’ were mercifully snappy, with great brevity built into the script. Only as much as we needed to know was included, which kept things moving along at a thrilling pace. The quirky use of pre-recorded voiceovers, giving voice to unseen television programmes and the outside media, was also a nice touch and gave a sense of the world outside the immediate drama.

Given Australian football’s entrenched image of masculinity, a cross dressing football player is actually quite a brave and tough issue to tackle for a mainstream theatre production. But while there’s the chance for a show like this to cause some offence to less open minded audiences, the intelligent and carefully handled contents of the script (while not being overly precious) and the larrikin, tongue in cheek humour employed by the cast meant that this did not seem to be the case at all.

While the context of ‘Managing Carmen’ lies within the world of the AFL, this is by no means a story overshadowed by the game itself. Rather, it examines the culture in which those who make their living from football inhabit, and what occurs off the field to keep the illusion of it alive. Overall, this show has the potential to be a strong and minimally threatening vehicle for building tolerance and compassion towards those who don’t quite fit the mould in the manufactured world of Australian sport.

When: 24 to 28 June
Where: The Q Theatre
Bookings: Closed