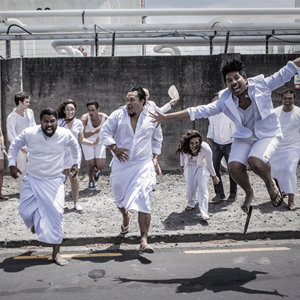 The last musical I recall about the South Pacific was, well, South Pacific – a musical very much from an American perspective. ‘The Factory’ on the other hand is a purely New Zealand production, created and performed by people born and bred on its neighbouring islands.

Set in the city of Auckland in the 1960s, this sweet, light and vibrant production tells the story of father Kavana (Aleni Tufuga) and daughter Losa (Milly Grant), who leave their island home for the big smoke in the pursuit of a better life. With the help of Misilei (Paul Fagamalo), they secure a job in a textiles factory where the employees consist of other Samoans and Tongans with the same hopes and dreams.

Kavana and Losa quickly realise New Zealand is not quite the “land of milk and honey” they were expecting, as they come to realise the factory is owned by the bitter and neglectful Richard (Paul Glover).  However, his son Edward (Ryan Bennett) looks after the workers as best he can and it’s not long before he falls for Losa, and they find themselves railing against a clash of class and cultures.

Pacific Islanders are well known for their stunning singing abilities, and they didn’t disappoint with ‘The Factory’. From the outset they absolutely overwhelmed the environment with the beauty and power of their voices, filling every corner of the Canberra Theatre with the most rich and joyous sounds (also courtesy of Musical Director Tama Waipara and Composer Poulima Salima) that you’d ever have the privilege of hearing.

The genre of each song was also incredibly varied, ranging from traditional compositions, to anything from gospel, soul, ballads funk and disco. All were slick and equally catchy, accompanied by some groovy and, on occasion, acrobatic moves by choreographer Amanaki Prescott Faletau.

What sealed the deal though was the exquisite pacing of the show, which kept the energy and sass of this musical consistently strong, with not one single lag throughout its duration. Each and every moment was filled with wonderment and the audience firmly in the palms of the performers hands from the moment they graced the stage.

Tufuga, Grant, Glover and Bennett as the leads were the most mind-blowingly pure and unwaveringly strong vocalists, and it practically induced a state of nirvana closing one’s eyes and just basking in the glorious sound seemingly coming straight from their hearts.

Likewise, the supporting cast (Taofia Pelesasa, Tavai Fa’asavalu, Troy Tu’va, Saipele Maika, Valentino Maliko, Joanna Mika-Toloa, Nastassia Wolfgramm, Suivai Autagavaia, Loma Teisi and Rosita Vai) were also extremely gifted, with a flair for comedy and a real display of camaraderie and pride. They worked wonderfully together as a team, with their collective timing spot on in every way. Fagamalo’s wonderfully campy portrayal of Ms Misilei also deserves an honourable mention, particularly his Priscilla-esque display at the factory social.

‘The Factory’ may be based on a simple, tried and true storyline, but what Kila Kokonut Krew has done with this foundation knocks modern musical theatre out of the ballpark. Audiences in the region are so used to seeing American and European productions that it was getting hard to believe that any musical produced from this neck of the woods could ever have popular appeal – I’m glad to be proved so wrong, and that the Pacific has found its voice…so to speak.