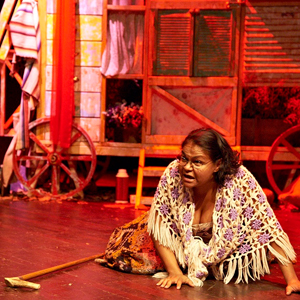 Speaking as a child of the eighties, no one did creepy retellings of Grimm’s Fairy Tales like Shelley Duvall in Fairy Tale Theatre – until the creation of ‘The Magic Hour’, that is.

Written by playwright Vanessa Bates and performed by Ursula Yovich (The Gods of Wheat Street) as a one woman show, this gritty production takes the thoroughly flogged stories of Little Red Riding Hood, Cinderella, Rumpelstiltskin, The Frog Prince, Rapunzel and Jack and the Beanstalk, and shifts the focus from the heroines to the minor, but infinitely more interesting, female characters.

As well as this departure from tradition, ‘The Magic Hour’ also gets the Aussie treatment, but portrays the very specific world of the marginalised and disadvantaged, giving it some serious edge.

With her whimsical gypsy caravan as her quaint backdrop (by Alicia Clements), Yovich as the barefoot storyteller takes us on a journey though the lives of those such as Jane – the single mother of Jack (of the Beanstalk) and recovering heroin addict; Collette – the late blooming, self harming stepsister to Cinderella; Hannah – the elderly legal guardian of Rapunzel who lives in a housing trust tower with the long haired beauty and – well, you get my point.

Grimm’s Fairy Tales are very aptly named, however, after much Disneyfying over the years they have become quite sanitised. ‘The Magic Hour’ puts them right back into the gutter, with all the crassness and cynicism one could hope for, and then some. But there’s heart there too – each socially insightful story ends with its own sweet and haunting song (with music by Joe Lui), made all the more mesmerising by the dulcet tones of Yovich’s lovely voice.

Yovich’s delivery of the show overall was impressive, showcasing her chameleon-like ability to transform from one character to another in the blink of an eye and bringing depth and authenticity to each portrayal. She was an incredibly engaging and generous performer, bringing a down to earth and charmingly facetious quality to the production that had the audience leaping to their feet for a standing ovation at the conclusion of the show.

The humour, wit and prose poetry written into the script is also enchanting. It subtly weaves in hilariously apt pop references and pushes the limits in terms of its dark and confronting themes, but easily avoids going over the edge to Wrongtown.

Winter is the perfect time to be bringing these kind of plays to Canberra; the invitation to gather around at a warm theatre and listen to strange and quirky adaptations of ancient tales is a very appealing and season appropriate proposition to encourage one out of hibernation, and I reckon ‘The Magic Hour’ is absolutely worth leaving the cave for.

When: 4 to 6 Jul
Where: The Street Theatre
Bookings: thestreet.org.au