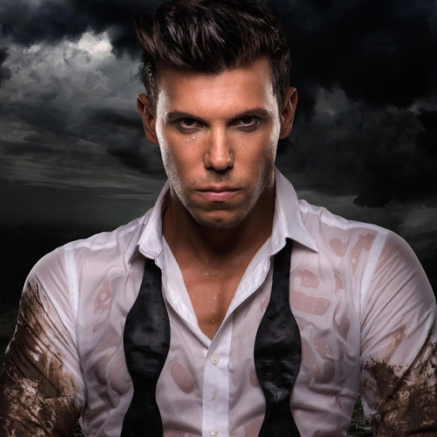 The gothic tale of Wuthering Heights bewitches and baffles me in equal measure – while the logical part feels that Catherine and Heathcliff are emotionally disturbed, co-dependent sadists, another more romantic part is seduced by their mutual passion and the lengths they go to in proving their points. It’s the car crash that you can’t bring yourself to look away from but, really, one shouldn’t judge their 19th Century derangement from the luxury of a modern day context.

Yet another skinny-jean and strine remake of a classic to grace the stage of the Playhouse in recent years, this production of Wuthering Heights has modernised the decadent garb (by costumer designer Leigh Buchanan) and language, but leaves the remainder of the story largely uncorrupted. Admittedly, it is a bit jarring at first to hear an Aussie twang in the place of a crisp British accent, but this becomes endearing when your expectations adjust.

For those unfamiliar, Wuthering Heights goes as such: Heathcliff is a wild gypsy child (played by Ross Balbuziente) adopted by the Earnshaw family of the Wuthering Heights estate. Heathcliff and his new sister, Catherine Earnshaw (Gemma Willing), form a close, obsessive relationship that ends up destroying themselves and everyone around them – the end.

True to the book, this production is narrated by Nelly Dean (Linden Wilkinson); the Earnshaw’s long-suffering and extraordinarily tolerant nanny. More like a lament, Wilkinson deftly connects the chain of events in articulate detail and keeps the story moving at a cracking pace. She is also creatively supported by projected images that introduce each character via living portraits and traces them as they gravitate around the story.

The task of capturing and recreating Kathy and Heathcliff’s intensity and turmoil is a big ask for any thespian. However, through some astonishingly brutal physicality and fervent cursing between the cast members, they have it assuredly in the bag. Willing is particularly impressive with her unabashed meltdowns and contemptuous use of choice language.

An indication of success for a performer playing Heathcliff is whether they make your blood boil, and Balbuziente does just that and then some – he is unspeakably savage and merciless, exactly as the role dictates. Tim Dashwood makes a regal and unusually camp Edgar Linton, while Nelle Lee as Frances Earnshaw/Isabella Linton/Linton Heathcliff and Nick Skubij as Hindley Earnshaw/Hareton Earnshaw are masterful chameleons in their multi-generational roles.

The elegant, multi-purpose set design by Josh McIntosh simultaneously captures the desolation of Wuthering Heights, the opulence of Thrushcross Grange and the haunting, foggy ambience of The Moors, transforming seamlessly between the locales. The inky, willowy curtains are a sophisticated touch, serving as both a screen for the ghostly projections and a conduit for the howling winds of those Moors. The best thing about the set through is that it gets just as messy as the emotions. Real feather pillows are shredded, rain falls from the sky and furniture is tossed about, really turbocharging the atmosphere.

All of this builds up to a delirious, disorienting finale that will blow your mind, only to leave you stewing in a bleak silence moments later as the winds blow eerily through the curtains of the empty stage. Overall, Wuthering Heights is sure to satisfy even the most tragic of romantics, possibly meeting one’s quota of drama for the remainder of 2016.

Where: The Canberra Theatre Centre