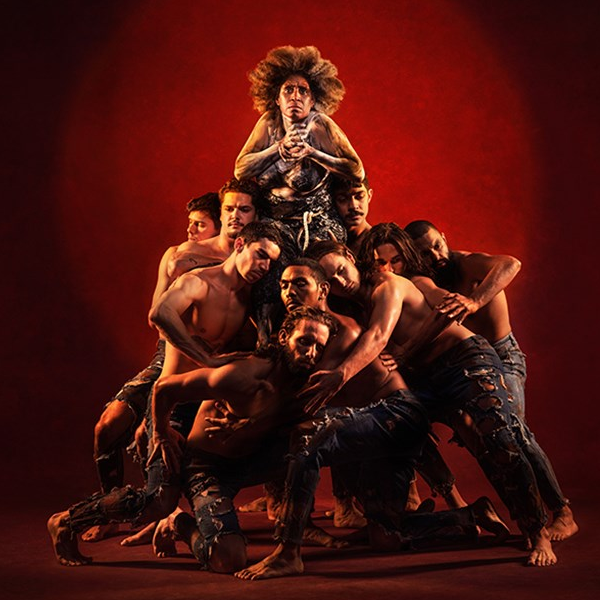 As has become accepted practice, the show began with a Welcome to Country. Karl Telfer added to the traditional Kaurna Welcome on this night, sharing his sadness by reading a poem on the six month anniversary of his mother’s passing. With the mother (Wudjang) as the central theme of this production, it was especially poignant.

Set Designer Jacob Nash’ stage design features a large rock platform with a confronting, turning, serrated metal wheel that fills the centre stage, immediately referencing the plundering of the land by industrial machinery. In the digging for a dam, shrouded bones are revealed and the story of Wudjang unfolds.

This final production of Stephen Page’s for Bangarra Dance Theatre was developed in association with the Sydney Theatre Company, and the weaving of music, dance and theatre makes for a riveting production. Almost operatic in tone and style, the production is anchored by the compelling musical compositions of Steve Francis, performed by musicians Brendon Boney, Amaru Derwent, Tessa Nuku, and Véronique Serret. The latter plays a searing violin, and doesn’t remain confined to her corner of the stage, often moving in and out of the action with her jarring, haunting staccato augmentation.

Kirk Page plays Bilin, the Yugambeh man working at the dam site in Yugambeh country, who claims the bones of Wudjang (Elma Kris). The harmonious blending of English and Mibinyah language (as written by Stephen Page and dramaturg Alana Valentine) signals the passionate and sorrowful musical narrative that is to come as the Yugambeh work to restore Wudjang to her ancestral home.

“While the land is here, we are” they sing, a haunting refrain that wakens Wudjang and her young companion spirit Gurai (Lillian Banks). Maren/Yugambeh Shearer (Elaine Crombie), Duggai/Wheeler (Justin Smith) and Nanahng (Jess Hitchcock) bring their powerful voices to the fore as primary vocalists, while the 17 dancers move in the distinctive Bangarra choreography.

Nanahng is not convinced of the need to learn from Wudjang; the arrogance of youth has her questioning what an ancestor can bring to her life in the present. Wudjang wants her to understand that she is of the past, the present and the future – there is a dreaming reference to the world of the ancestors before we are plunged into a rude and confronting reminder of the country’s colonial history; murder, massacres, slavery, rape. This is not gentle and definitely not polite. In the dance of death, horrific screams of women rent the air as their children, their brothers, their fathers are murdered by the invaders – the settlers, the graziers, the soldiers of the ‘frontier wars’. Elaine Crombie sings despairingly on the rape of women, and the birth of the mixed race babies. Nick Schlieper’s lighting is what we have come to expect of him; evocative, sharp, expressive, giving each scene its own dramatic envelope.

The final scene is a fusion of traditional dance, modern choreography, musical theatre and First Nations storytelling. As Wudjang is sung to her final resting place, it is understood that ‘always was, always will be’ is more than words; it is the acceptance that the past informs the present, and the future. A reprise of “While the land is here, we are” beautifully bookends the production.

This is a beautifully staged work, and is almost a genre of its own. There are moments where it tries to tell too much at once and becomes a bit muddled, but it pulls free and continues on its heart-rending way. Page’s choreography is superb, and the singers more than complement the accomplished score.

The depiction of 60,000 years of First Nations people is a perfect swan song for the remarkable Stephen Page.