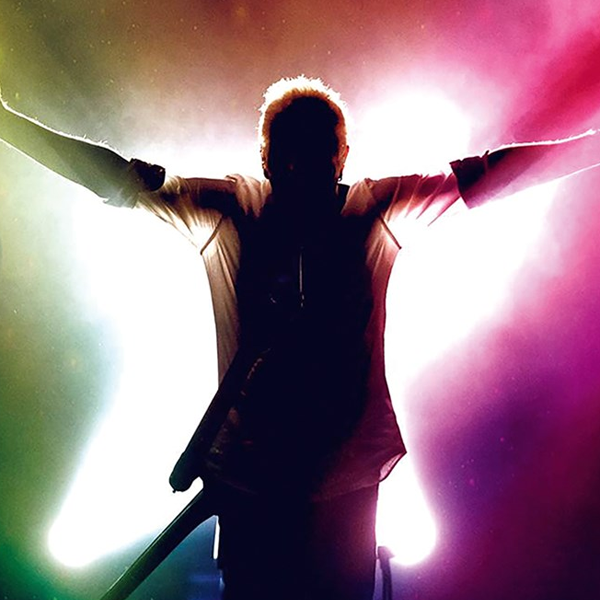 It’s beautiful in the warm sunset on the Village Green laying at the foot of Montefiore Hill behind the Adelaide Oval. The grass on this practice cricket oval is pitch perfect. I find myself sitting between two other rock music reviewers and we chat about the old concerts back in the 70s. One says he sold an Icehouse ticket stub to a collector on eBay for $135! However, none of us saw Icehouse when they opened the Festival in 1988. Iva Davies claimed to have sold forty thousand tickets that year, but played to 120 thousand due to gate crashers.

The Welcome to Country ceremony is refreshingly cosmopolitan with a focus on International Women’s Day and a mention of Ukraine. Then blues and roots artist Emily Wurramara from Groote Elyandt tames the restless audience with charm and soothing dulcet tones. Next the formidable and much-awarded William Barton frenetically picks his guitar – transparent yet infused with candy colours – while eliciting the most sonorous notes from the didgeridoo. His uncle said that the didge is a language; a language Barton has clearly mastered as noted by the embrace of classical composer Peter Sculthorpe and a world tour in 2004.

Icehouse then takes the stage to anticipatory applause and begins with Icehouse, the title song of the 1982 album of the same name, when Iva Davies’s band was called Flowers. “No love inside the icehouse.” A melancholic or dark theme is repeated in many of Davies’s lyrics if not also in the riffs.

The fans will know that Davies literally chews his way through his canon. Sporting a black leather jacket and a head sprouting a mane of silvery hair, Davies indeed is burnished rock silver enjoying his place in history. Each song is accompanied by an upstage display on a gigantic screen. Some songs co-exist with abstract graphics. The dynamism of virtual reality’s multi-dimensionalism makes some quite trippy. Other songs are paired with re-imagined old videos in which we delight in the various ages of Davies - his youthfulness and the defining hairstyle of the decade – who was synced with the live music. Very effective. I loved the overlong mullet Davies sports while endlessly traversing the back-alleys of love-wonder in Crazy. Street Cafe has an even younger Davies exploring memories of something like Marrakech. But Hey, Little Girl ought to be dropped from the song list – it just sounds like an unsympathetic lecture to a young woman in need of help – in spite of its catchy melody.

Naturally, we’re all hanging out for the title song of the Great Southern Land 2022 tour, but it is disappointing. William Barton returns for some introductory didge but he is quickly overwhelmed by the instrument mix. The eerie and haunting longing of the original that makes the song uniquely Australian goes astray. The initial evocative image of a red-hot sun on the horizon gives way to 1970s-quality tourist videos - including a kangaroo chewing on some grass - and cliché natural attractions. Not an Indigenous Australian in sight in these images of the false frontierism.

With Can’t Help Myself and We Can Get Together, the audience is finally on its feet, which it might have been much earlier except people are generally unsure how to act post-Covid and in a seated Festival format. Icehouse returns with two more cover songs from their heyday, and the dancing in the aisles compels them to finish with Nothing Too Serious.

Davies is foremost a song writer, and most of the audience received a nostalgic re-association with his famous songs, and those who didn’t are probably too young. But it is the amusing banter and guitar playing from veteran Icehouse musician Paul Gildea, the virtuosity of Michael Paynter, and Hugo Lee’s sax playing that gives the concert its colour. For a band desperate to get out post-covid on a national tour, the overall performance was lacking in vigour.