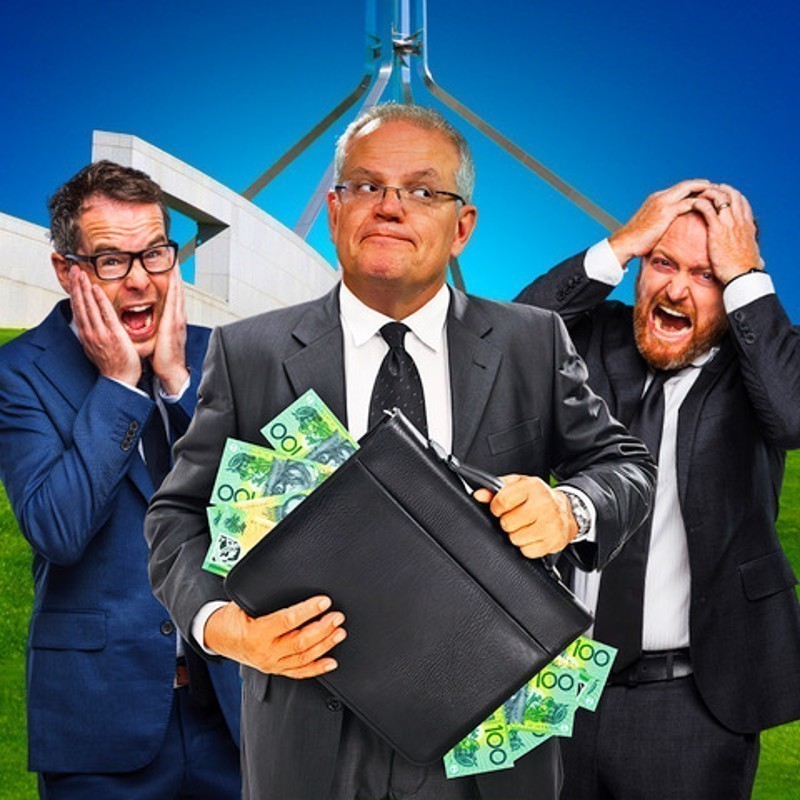 Adelaide Fringe. The Chaser.com.au and The Shovel. Gluttony – The May Wirth. 9 Mar 2022

Charles Firth and James Schloeffel are back again with their tried-and-true format for political satire and a very funny show. To know James Schloeffel is to subscribe to www.theshovel.com.au. There you will find the headlines, pictures, and short articles, neatly tabbed into categories like The Nation, World, Business, etc that will split your sides with laughter. Eg. “Starbucks to punish Russians by continuing to operate all 130 Russian stores.” Charles Firth is famous for his contributions to television’s The Chaser, CNNNN, and The Chaser’s War On Everything which broke new ground and alarmed authorities with their cheeky and risky antics, all to prove a point, of course. The Chaser similarly has spoof news at chaser.com.au with stuff like, “Scott Morrison selflessly agrees to isolate on remote Hawaiian beach.”

This year’s offering is extremely funny. Schloeffel and Firth sport fluoro vests and hard hats knowing it’s the only way to fit in with Scomo’s ensemble. Doffing them early reveals their trademark ill-fitting out-of-fashion suits. They advertise this show as a masterclass in lying and deception and it’s clear who they learned the trade from. Firth and Schloeffel gee up the audience with examples of masterful spin by the federal cabinet and demonstrate the detailed methodology. They are a wonderful team bouncing around the ideas and every point is visually enhanced on a large back screen. The Year in Review was a hoot, but to be fair, some credit is due to federal Liberals and Nationals for providing a cornucopia of satirical opportunities at such a consistent rate. To promote vaccinations to their constituency, how about no jab, no negative gearing. And just when they thought they were running out of material, Barnaby Joyce re-joins the front bench.

Charles Firth would not be Charles Firth without a Chaser sting operation to show us. He created an internet storm over renaming fairy bread to fun bread and garnering over 1000 signatures in 2 hours for the cause. Even after the scam was exposed by Ben Fordham on 2GB Breakfast, a second wave of getting it out there showed how lazy journalists from even major outlets like the ABC and News don’t check sources.

SPIN is tag-team political lampooning at its best, two comedians and political and social hawk eyes for the price of one and the whole is greater than its parts. I think I’m now fully prepared to run in the May federal election!

Where: Gluttony – The May Wirth