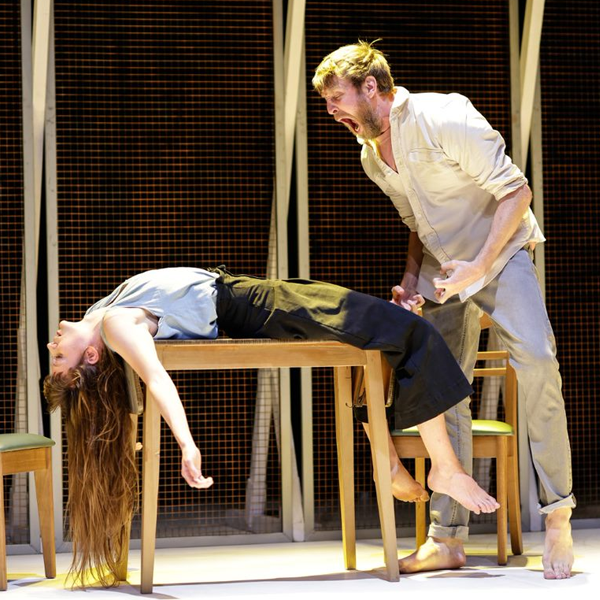 Juliet & Romeo is the only Festival show this year filed under dance, but it is much more than that. It is based on a terrific premise conceived by Lost Dog’s artistic director Ben Duke. What if Shakespeare’s star-crossed lovers secretly walked out of the Capulet’s mortuary vault in modern times and eloped to Paris? We pick up the action many decades after those fateful days in Mantua. From the start, the audience is in the presence of fame! This isn’t an ordinary couple - wow – this is Romeo and Juliet – aged now around their 40s, on stage! You want to run up and get their autographs. Gee, how did they, you know, get away with it? You’ll get the reveals in due course, but we quickly understand that they are having some rather common matrimonial issues. No matter the spats, performers Kip Johnson and Solène Weinachter and their director, Ben Duke, have you fully convinced that their Romeo and Juliet have converted their aching youthful physical love to a long lasting and deep relationship resonating with respect, even as we see them desperately fighting to keep it together. Having gone through this process myself, I can testify to 100% accuracy of the normative male and female perspectives, ironic and sadly true.

The couple are having maybe a final go at repair, clearly after many earlier unsuccessful attempts. Weinachter, Johnson and Duke convey Juliet’s eagerness to follow the process with precision and Romeo’s evident reluctance but resignation to at least try. She expresses her feelings fully and vigorously; he has great trouble. I sensed an issue when she corrected him three times in seven minutes.

Comprising all of dance and dialogue, psychology and retrospection, the couple explore their past by role-playing loaded with ironic hilarity. They search for a shared past only to discover how often meaning overprints memory. The role-playing is highly physicalised by these remarkably versatile performers. Romeo’s remembrance of sexual desire upon first seeing Juliet at the costume party is danced with comic virtuosity. Johnson’s bodily contortions conjured a limb or two flying off his torso. Another blood-boiling dance highlight is the pair’s first sexual encounter in Paris. The choreography (no credit in program) is astonishing – no furniture is safe, no wall too vertical. They clasp each other in passionate love holds only to fly apart to catch breath and recouple with renewed vigour. Bravo!

They relive their trials and tribulations and the attendant emotional rollercoaster; their resilience and respect gets them through. But it seems that every event has a cost, takes them a little further away, so you are anxious for the outcome, because in the course of an hour, you have invested a lot of yourself into this remarkable couple.

Ben Duke’s description in the program notes of the development of this work with Solène Weinachter is very amusing reading. Indeed, the experimental route taken to create the narrative arc is evident in the performance as everything seems spontaneous and as fresh and messy as real life.

Solène Weinachter has an accent somewhere between Paris and Berlin that takes some getting used to but gives the performance a Europeanness that we like here. Kip Johnson may have come from the Hugh Grant Acting School of Bumbling Honesty, which is a good school. Try not to sit in the balcony as you may have to watch the show through a Perspex screen designed to prevent you falling into the stalls.

Lost Dog’s Juliet & Romeo is a first-class production in all of conception, performance, dance, humour, poignancy and theatricality as well as veracity on the important topic of saving a marriage. Bravo!