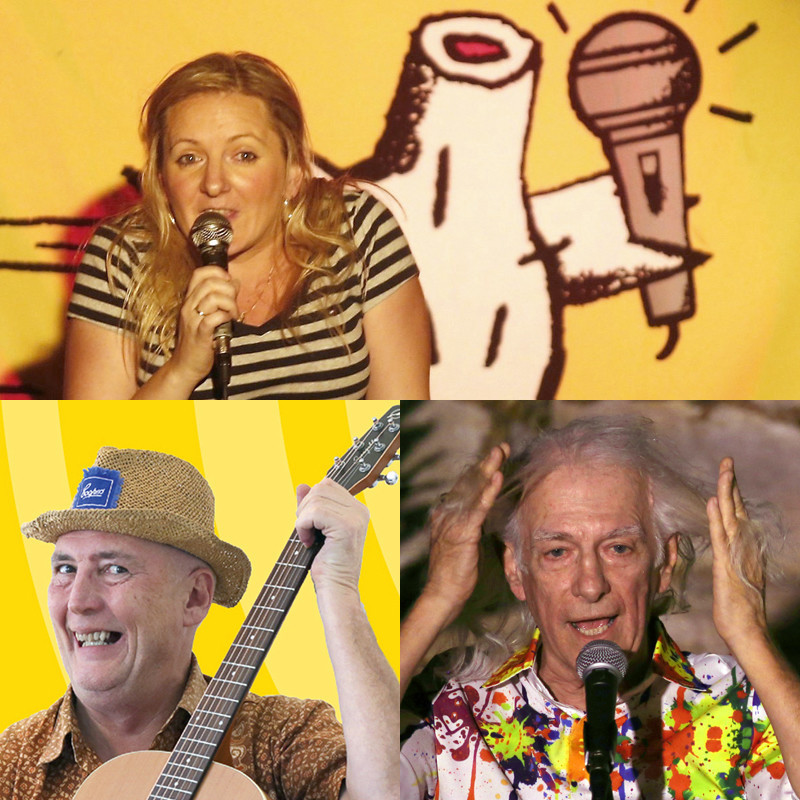 The Jade is a great venue. Cheap beers, an uncluttered wine list, and curries are available to sip and savour on the old-school parlour furniture in the sitting room of the former manse. The venue, accessed by an adjacent door, is spacious with cabaret sitting under the chandeliers and stools all-around next to the walls. There is ample outdoor seating for pre- and apres show under the fairy lights - all right in the heart of the city.

On offer is a night of three comic acts. The show opened with a weak introduction for the trio and then straight into a threesome act led by Eric Tinker and his few chords. The generational gap was the theme - Tinker and Denzo could remember dialing a phone and R-DD never saw one. The Boomers vs Millennials song written by Tinker is quite good in comparing the lingo. Totally under-rehearsed, the song was re-formatted into a competition that didn’t quite work as the other two comics floundered trying to cheerlead the audience. The Boomers took two direct hits. Tinker fumbled a bit about a missing page of the song, and then a Boomer in the audience had no idea that his phone was running on with an audible podcast until another audience member pointed it out. It took him two goes to turn it off. It was right on cue.

Ron-Diggity Dawg – identifying as a woman I should let you know, and there was no doubt about that – fell on some sharp quartz with her act. While lewd and overt sexual references probably play very well after 11 o’clock on a Friday night at the Roxby Downs Tavern, the small Wednesday night crowd didn’t have enough alcohol or too much inhibition for R-DD to get the ball rolling, and she was caught between a rock and a hard place. Nonetheless, it was an education and I’ll never again take oral sex for granite. (PS – she’s a geologist when not going on about her wet lettuce.)

Eric Tinker - or Derek Ticker as the MC introduced him, or Eric Tickner as Denzo called him - had more success. Just the fact that there is a guitar involved gets your attention. Tinker is whacky and so unabashed that when things go wrong or even a bit not good, he just keeps on keeping on and it all seems part of the show. Perhaps simply being a trier and just out there is the secret. Whatever, he is his own man with novel ideas, like the pros and cons of mermaids and reversed mermaids and the ramifications of husbandry in Amy Married A Horse. He twice demonstrated that the opening chords of Smoke On The Water are very difficult.

Denzo called COVID the Boomer Remover, but it hasn’t got to him, yet. His schtick is very much about a Senior Card Holder’s life – living alone, RSL meals, and pension day delights. His idea of safe sex is having a defibrillator next to the bed. Denzo’s got something there, but he’s running out of time to get it right. Back to the Sunshine Coast’s retirement homes to research more material.

The show ended with another tinker by Tinker which put a pleasant end to it. Maybe on subsequent nights it will be 3 Stars.