The Boy Who Talked to Dogs 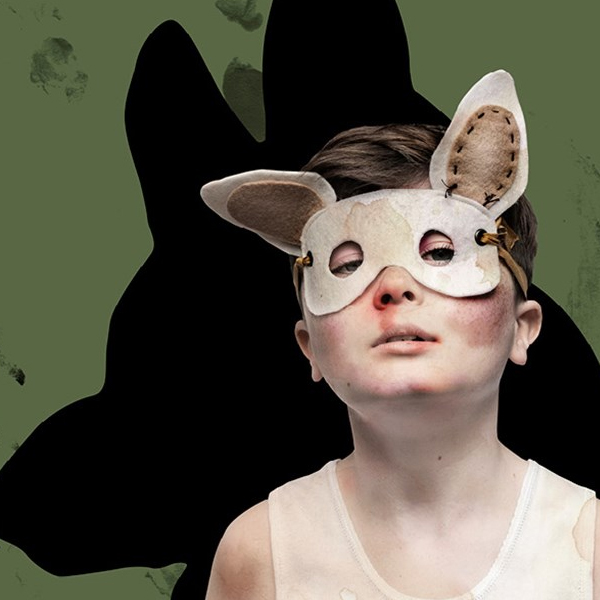 It’s as Irish as a turf fire.

There are reels of characterful Irish music and an athletic Irishman with a brogue of James Joycean intensity.

It’s a true story, so its theatre makers have thrown the cultural book at it, so to speak.

Eschewing proscenium traditions, they have sprawled it across a vast shed wherein a covid-masked audience sits cabaret-style at tables and the players move between them. Three corners of the venue contain concealed sets which open up like giant popup books. The fourth corner is a real stage, bright and lively, wherein the show’s spirited musicians dwell.

Essentially, The Boy Who Talked to Dogs is a one-man show with a glory of production values, including foot-tapping music and the utterly wonderful voice of Victoria Falconer singing the songs composed by Lisa O’Neill and Quincy Grant. Banjo, ukulele, accordion, guitar, fiddle - the band of four plays them all, at times roaming the room or perched on a central dais. They step in to people Martin’s world.

Bryan Burroughs plays the boy Martin McKenna. McKenna is a real-life character, author of the book The Boy Who Talked to Dogs, and now very much an adult, Australia-based and working as a YouTube dog trainer based in Nimbin.

His portrayal in this work is highly demanding since there’s a lot of territory to be covered as the character darts and dashes through the audience in the huge venue. Burroughs does so with really beautiful litheness, fleet-footed and athletic. All the time, he’s busily on script, with a mighty performance, narrating the tale of the Irish lad, the runty last-born of triplets who, for the miserable life of him, could not fit in with the Irish village life around him.

As conveyed in this Amy Conroy adaptation of McKenna’s book, it is a heartrending tale of a poor, quirky little boy regularly beaten by his father and never putting a foot right with his mum or school or anything very much. The only simpatico souls were the local dogs, and so the saga evolves of his ending up living with a pack of dogs because at last he had found a place where he belonged and could have respect.

The dogs are a delight of shadow illumination in what is altogether a really stunning lighting plot by Chris Petridis. Between the puppetry images and the conviction of the actor establishing his place among the dogs, those mere shadows achieve personality and a life of their own. And, with a complex and finely balanced soundscape, as well as the artful music, the tension, dramas, heartbreaks, and triumphs of Martin’s world become quite vivid.

The only shortcoming of this work is its huge scale.  While the action is generally elevated, the sight-lines from one corner of the Thomas Edmonds opera shed to the other far corner are a bit of a strain and the sophistication of Wendy Todd’s fine sets can’t always be appreciated. Would that the venue were more intimate. The seating is GA but seats are allocated at the door. Perhaps ask for a central spot.

Between Andy Packer’s wonderful Slingsby and the fellowship support of State Theatre’s Mitchell Butel, with imagination and courage and good sponsorship, this is one of those Festival experiences which will steal a permanent spot in the memory.

And, if there is one indelibly beautiful line in the script of wild Irish verbosity, it is that delivered by the show’s Australian troubadour Victoria Falconer to the winter-chilled Irish boy, Martin. She tells him: “Australia is a place that is like swallowing yellow.”