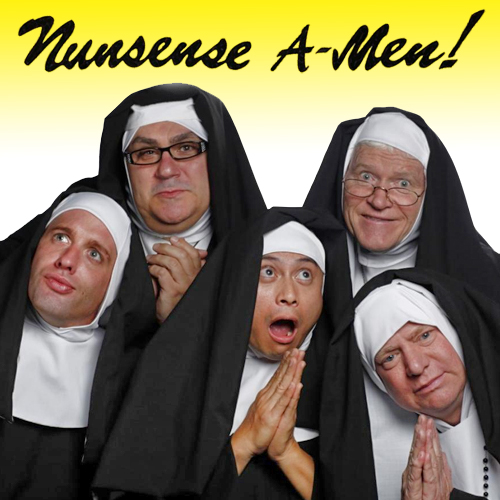 Writer Dan Goggin sounds like a fun guy but he has only one thing on his mind – nuns! What started out as his greeting card quips by cartoon nuns has turned into a nunsense factory initiated by his first off-Broadway musical in 1985 which had nearly 3700 productions and was translated into 21 languages. He milked the concept with sequels themed on country & western nuns, Yiddish nuns, Christmas nuns, etc. - six new musicals! – and then in 1998 this lucky seventh - Nunsense A-men! - a transvestite version that is so effectively ridiculous, it’s hard to imagine how its antecedents with female cast could possibly be as funny. Writing about nuns must be habit-forming.

The convent-cloistered nuns are putting on a fund-raising show – reasons revealed by a charming prologue video skit of a poisonous lunch – and no form of entertainment is safe from these batty sisters as they hoof, joke, jostle, and reveal their vulnerabilities.

The male cast sometimes play men dressed like nuns, sometimes nuns, sometimes men playing women, sometimes women – did I miss anything? David Gauci is a formidable addition to any sisterhood and director Matthew Byrne gave him the pivotal role of the Mother Superior. Gauci has an awarded career in professional cabaret, and in producing hits with his theatre company Davine Productions. Gauci’s penetrating deep voice is always a pleasure, even when spouting nunsense. A special bonus was his physical comedy in a sketch where Mother Superior accidentally sniffs up some amyl nitrate – his hyenic laughter was literally infectious amongst the audience. Jayke Melling played a novice nun with a fetching naivety and an insouciant smile that, well, made you smile. His ballet was a surprise but wouldn’t get him into the Bolshoi. Ron Abelita’s nun was slightly crazy and a real treat. His Sister Mary Amnesia’s ventriloquist act was also unexpected – a much forgotten art. Chris Stansfield’s Brooklyn accent and undisguised masculinity gave me the impression he escaped from South Pacific to don the habit. A warm performance and another powerful voice. Producer and director Matthew Byrne also plays convent nun second-in-command. He generously mostly inhabits an elderly nun dealing with the others’s tomfoolery. Byrne commanded the closing number and is the true mother hen as character, and likely also as director and producer. Knowing Byrne, he probably inserted a few “enhancements” to Goggin’s book.

Loose chorus work must have had choreographer Rose Vallen wonder why her simple steps were only regarded as mere suggestions by the irreverent and independent cast members.

Musical director Ben Saunders had his hands firmly on his organ and kept the others musically timed.

Nunsense A-men! is a vacuous night out of frivolity and vaudeville and not to be taken at all seriously – a perfect evening cap to a long hard day.