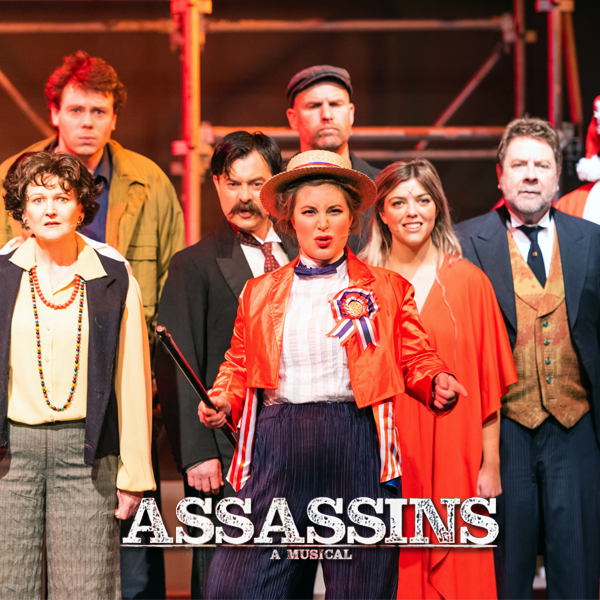 With music and lyrics by Stephen Sondheim - West Side Story, A Funny Thing Happened On The Way To The Forum, Gypsy, Sweeney Todd - Assassins (1990, much later than any on the list) isn’t in the same league. It’s based on an idea by Charles Gilbert, Jr. and that’s an interesting story. Sondheim was a panelist at a script lab and liked Gilbert’s offering so much that he asked if he could borrow the idea. “Great,” said Gilbert, “I’d love to write the book.” “No,” said Sondheim, “I have somebody else in mind, so thanks. Leave it to the big boys,” or something like that.

The wings to the stage of the Stirling Community Theatre are wonderfully decorated with a newspaper collage of the bad news of the day – the assassination or assassination attempt of an American president. Large black and white portraits of the relevant presidents are quite nostalgic to see and are rendered over in a blood red spreading spot when their time comes in the narrative (Cameron Hapgood – set design and Matt Ralph – lighting design). There is a professionally fetching programme design as well.

The band, under conductor Andrew Groch, starts off a little shaky and promises a disappointing musical evening, but they improve. In the opening number, the assassins and failed assassins from Lincoln’s to Reagan’s, mill about aimlessly as if at a carnival. One by one they are invited by a carny - who appeals to their aimless nature - to buy a pistol in the motif of a duck-shooting game and make something of their lives. Megan Donald as the game handler murders her uncredited choreography, probably the directors’, Monique Hapgood and Macintyre Howie Reeves.

The granddaddy of American assassinations is Lincoln’s, so worthwhile time is spent on it, and indeed, it’s a highlight of the production. David MacGillivray delivers a fully developed characterisation of John Wilkes Booth and his obsession with his place in history as someone setting a great wrong right is beautifully dramatised in the moments before his capture. Casmira Hambledon and Bronwen James are charismatic and all too plausible as the failed assassins of President Gerald Ford, who, quite independently made their shooting attempts only seventeen days apart. That would keep the Secret Service busy. Their fictitious scenes together as common spirits needs a bit of subtlety but did provide provocations of humour. The other assassins, and wanna-bes, are more inscrutable, simply because they fit the bill of the loner sociopath and they are harder to come to grips with. Robin Schmelzkopf’s Charles Guiteau - the assassin of President Garfield – is avuncular but unfathomable and the other performers also haven’t much to work with. Yet weighing in at two hours and fifteen minutes without interval, it is enough. James Nicholson’s costumes were extremely good in defining the styles of the days of the deeds.

John Weidman’s book has the assassins and failed assassins mingle and merge as phantoms. Some dialogues between them, and monologues, is too long and tedious. The last assassination that stopped the nation was Kennedy’s and here Weidman goes off into la-la land with a scene on the sixth floor of the book depository building with the diachronous group encouraging a reluctant Lee Harvey Oswald to get on with it and join their infamy, as if his dilemma was whether to shoot himself or at Kennedy. This is very fanciful as the evidence shows that Oswald was a committed activist and highly motivated. And anyways, Oswald did not fire the killing shot. Victoria’s ex-detective Colin McLaren - in his 2013 book, The Smoking Gun – re-demonstrated Howard Donahue’s theory of decades ago that a Secret Service agent in the follow-car accidently killed Kennedy, creating that horrific head-exploding wound with the Service’s AR-15. The cynicism and black humour dominating Assassins melts away with some sombre reflections on the tragedy of Kennedy’s violent passing.

Assassinsis a strange brew of verbiage and vaudeville, and only once finds real passion in John Wilkes Booth’s final moments. While Weidman’s book is a difficult target, this production has trouble finding it.