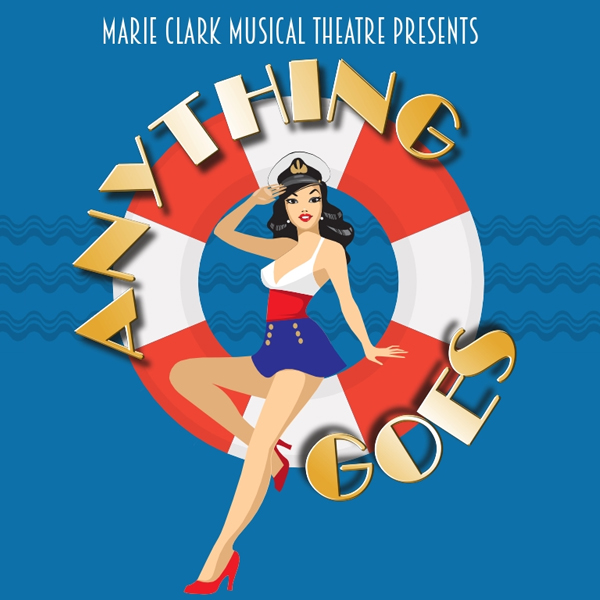 This production of Anything Goes is simply outstanding. Marie Clark Musical Theatre hits the high Cs in an exuberant, lively and flashy rendition of Cole Porter’s 1934 blockbuster musical comedy concerning the shenanigans on board a trans-Atlantic cruise ship. You’ll recognise most of the songs as some of music’s most famous: I Get A Kick Out Of You, You’re The Top, It’s De-Lovely, Blow, Gabriel, Blow and of course, Anything Goes – and be positively humming one of them whilst returning to your – no doubt – far less interesting life than the one on stage.

The production sets sail with lead Alana Shepherdson’s hot night club singer, Reno Sweeney, musing about her old pal and love desire, Billy Crocker, with I Get A Kick Out Of You. Throughout this production, Shepherdson is the epitome of the musical star – she has undeniable stage presence and flair with an attractive feminine and insouciant arc employed in her highly watchable dancing and singing. Bravo! Her vocal precision reaches its high-water mark later in the show.

Next, the rising curtain reveals the formidable foredeck of the SS American where we meet the strange parade of passengers as they board. Here Porter has fun parodying a cavalcade of miscreants and high society – a potent mix that gets blended into the plot, or plotting, such as it is. Young Wall Street wannabe Billy Crocker stows on board to win the hand of Hope Harcourt who is betrothed to Lord Evelyn Oakleigh – thus completing the double love triangle.

Director Michael Butler has the cast full steam ahead all the time, yet warp drive happens with astonishing regularity. Rosanna Commisso’s skilled choreography is hinted at in an early scene with sailors and brooms, but the big chorus numbers like the Act I finale and Blow, Gabriel, Blow in the second act are breathtaking. The deck of the American in these numbers is awash with swirling hoofers in a giddy blaze of colour and delight where time stands still but the dancers sure don’t. And leading these proceedings front and centre is the formidable Ms Shepherdson. These two large chorus dances are truly, stunningly accomplished. Bravo!

William Richards does a lovely love-struck Billy Crocker with empathy, a comic intent and sufficient voice. His duet in You’re The Top with Shepherdson’s Reno is a real treat – beautifully sung and choreographed, and joyful. Buddy Dawson is one of Adelaide’s finest musical comedy performers. He trowels on voice and physical mannerisms to satirise his gangster thug, Moonface Martin, with great success. Chris Bierton underplays his Lord Oakleigh, only to scatter his inhibitions to the winds in the third-last number of the show with a bizarre tango that is widely cheered by the audience. Bravo!

Costumes (Narelle Clark: cossie co-coordinator) are to die for, starting with Shepherdson’s two-tone gown in her opening number – indeed all her outfits fit for a queen. Bravo! Mike Phillips (lighting) often floods the stage in purples and pinks imparting a party time tint to the proceedings. Musical director Mark Stefanoff’s orchestra makes the night de-lovely and delightful, but might have benefited from another rehearsal.

Double bravo! A show not to be missed.