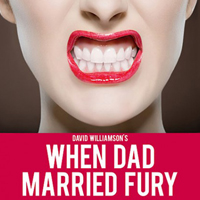 Many Australians feel quite an affinity for American culture, through the United States' dominance both politically and through the influence and reach of their film and television industries. However, while it’s one thing to admire it from afar, dropping it into an Australian context shows that it doesn’t translate quite so smoothly in reality as we might expect. When Dad Married Fury exemplifies this cultural divide, while examining the ties that bind Australia and the United States through a contemporary scenario that is as insightful as it is entertaining.

Written in 2012 by Australian playwright David Williamson, this play is set within the context of the Global Financial Crisis in 2007. Brothers Ian (Drew Tingwell) and Ben (David James) Urquhart are on a trip to Sydney with their wives Laura (Tanya Byrne) and Sue (Nell Feeny) to celebrate their widowed father’s 75th birthday. When they discover their father, Alan (Dennis Moore), is worth a fortune, and that he has also married a young American beauty queen named Fury (Annie Last), they panic at being left out of his will.

While Ian and Ben scheme to ensure they get a piece of their father’s fortune, Laura is fuming over the damage her father in law has inflicted on her family due to his dodgy business dealings, with her mother Judy (Jan Friedl) bearing the cost of his ruthlessness. However, when the family finally confront Alan and the stepmother that they already despise, nothing quite goes as expected.

There was a great deal of build up around Fury in the earlier scenes before she made her much anticipated appearance on stage, and Annie Last did not disappoint. In true American style, her character was larger than life and became the centre of gravity around which everyone in the production orbited. However, rather than being the vacuous, money grubbing stepmother that everyone expected, Fury was actually quite an intriguing and colourful character with a lot of depth – despite her radically conservative worldview.

Both left and right wing ideologies, and the differences in how they are interpreted in Australia and America, were represented in When Dad Married Fury. Playwright David Williamson, who took the high road and refrained from being offensive or reductionist, explored the resulting clashes boldly and eloquently with biting humour and satire. The commentary shining the light on the Global Financial Crisis and the ripple it made from the USA to Australia was also sharp and incisive, while bringing humanity to a topic that is often reified.

As mentioned above, Last was absolutely dazzling as Fury, making the difficult task of taking a character with such controversial convictions and making her endearing look easy. She shared an incredible chemistry with Moore as her ageing tiger of a husband, who acted the tyrant to perfection. Well and truly in Alan’s skin, he added just the right amount depth and vulnerability to prevent him from turning into a villainous caricature.

Tingwell and Byrne and James and Feeny as the bitter children/children in law contrasted well with the more extremist sensibilities of their parents, playing the quintessential temperate Australians to a tee. However, the husband and wife dynamics were just as fascinating, rounding the characters out and encouraging you to take a genuine interest in their motivations. Friedl also played an important role as the casualty in this story, offering a harrowing glimpse of the impacts of unbridled greed and corruption with sincerity and dignity.

The kitschy elevator music by Chris Hubbard breaking up each scene worked as a terrific tension buster throughout the show. The set created by Shaun Gurton was one of simplicity, allowing the cast to achieve swift and smooth transitions and a well paced show overall.

When Dad Married Fury is very much a play of our time, and a much-needed evaluation of what this phenomenon they call globalisation has actually delivered to the people living in two of the wealthiest countries on Earth. The approach it takes allows one to step back and reflect on a period of massive change, and the differences in how these changes have played out between Australia and its greatest ally, while still being able to appreciate the comicality of it all in the greater scheme of things. A class act!

When: Closed
Where: The Q Theatre
Bookings: Closed