The Mystery of the Hansom Cab 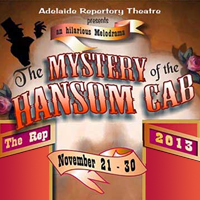 They might be about murder but there's no killing old-fashioned melodramas. They're just too much fun for one and all. Actors can let their hair down and ham it up to the hilt. Audience members can shout out and sing along. And so they all do in The Rep's The Mystery of the Hansom Cab, with added comic  music hall routines and a featured appearance by the illustrious Ethel Schwartz, who has been treading the vaudevillian boards since Roy Rene curled his Mo in Hindley Street.   Some may know her as Phyl Skinner. She holds the house in her thrall with an extended routine of very old and very funny standup, so perfectly enunciated that every syllable rings clear to the back row.

This exhibition of venerable excellence is topped only by a Johnny-come-lately called Joshua Coldwell who functions as the Master of Ceremonies. What a beautiful voice. What pure panache. He's heartthrob material with a touch of the old Tim Ferguson.

This is not to say that good performers are not thick on the ground. Good bad, performances, that is.

It's largely an experienced cast up there all of them overacting as hard as they can.

No one can overact as spectacularly as Penni Hamilton-Smith who mugs magnificently and brings the house down in her Salvation Army duds as Sal, the goodie and "other" love interest. Christopher Evans endears as that suitor and really amuses in tutu as he performs the famous balloon dance with the hilariously po-faced Lindy LeCornu. It's one of those winning, classic pieces of silly shtick of which audiences never tire.

Everybody gets to show their colours in the school of comedy melodrama  so there are plenty of vignettes - moments  for Jude Hines to touch the stars of Cockney connivance as Mother Guttersnipe, for Ryan Dooley to take heroic innocence to the depths of  absurdity, for Neville Phillips to wax honourable as the good (?) father, for  glorious ingenue Hanna O'Grady to capture the heart as the heroine, for Chris Meegan to bring tears to the eyes with a rendition of Danny Boy and, of course, for Barry Hill to swirl that red-lined cloak and wreak murderous mayhem in all directions as the classic villain. Hiss. Boo.

Tamara Bennetts stalks him with a massive magnifying glass while Jonathon Johnston, Sarah Connors, Karin Marx and Anne Hall turn on stalwart support under the seasoned direction of Gary Anderson. Not to be omitted is mention of his fabulous sets created with Vinnie Eustice. The play, adapted by former Adelaide playwright Barry Pree and based on a true story, has been relocated to olde Adelaide and Anderson has illuminated the stage with some superb period photo projections, albeit with a few wee tech hitches on opening night.

Costumes from Loriel Smart and Jude Hines dress both the performers and the period spirit. The lighting works, the scenic art is good and the musical accompaniment is outstanding - performed  by no less an Adelaide luminary than Sandi McMenamin on honkey tonk upright with Rowan Dennis on percussion.

This production is only for those who recognise that it is an extremely silly romp and who are willing to be a part of it by hissing, whistling and cheering. Then again, being the bastardised form of a genre which reaches back through Victoriana and into yore, one could deem it to have some cultural relevance. Either way,  it makes an upbeat sendoff  for the 2013 season.

When: 21 to 30 Nov
Where: Arts Theatre
Bookings: trybooking.com