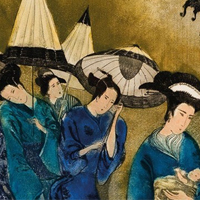 You can have too much of a good thing, can’t you?  Well, apparently not, for this is the third run in Adelaide since 1999 of this particular production by Moffatt Oxenbould of Puccini’s ever popular and much loved Madama Butterfly.

So why is Butterfly so popular?  For starters the music is amongst the most lyrical in the entire repertoire, and secondly the story line is believable, which is something that can’t always be said for grand opera.  Unfortunately the plot resonates as a metaphor for the tragic events that often unfold in times of militarism – the innocent become tragic victims and the aggressor is often oblivious to their hurt.  Of the glorious score, even opera naysayers begrudgingly admit they are familiar with at least part of the extended love duet at the end of Act 1 or with the Humming Chorus at the end of Act 2, which is faintly reminiscent of Valjean’s aria Bring Him Home from the musical Les Misérables.  (Who copied who?  Oh yes, Schönberg wasn’t even a twinkle in his grandfather’s eye by the time Puccini had long gone to that great opera chorus in the sky!)

The story line of Madama Butterfly is a simple one.  Pinkerton, an American navy officer takes a young Japanese geisha by the name of Cio Cio San (which loosely translates as Butterfly) as his wife to ‘entertain’ him when he is in port.  Despite his deep physical attraction to her, to him it is a marriage in name only and he intends to eventually take a ‘proper’ American wife.  But Butterfly in her youthful naïveté and with her ingrained sense of honour is committed to the relationship. She gives birth to a son and patiently awaits Pinkerton’s return, but when he does it is with an American wife.  Butterfly is devastated but can only think of her son’s welfare and makes arrangements to hand him over into Pinkerton’s care.  Her last selfless act is to take her own life to pave an easy path for her son to start a new life, and Puccini’s glorious score fittingly ends on an imperfect cadence.

State Opera bring a fabulous ensemble to this production, and mercifully there is not an aging or overweight romantic lead in sight! Cio Cio San is sung by Joanne McWaters, and surprisingly this is her first major role with State Opera. Her next is surely not too far away! Her voice is glorious and ripe for Butterfly, and she sang with great passion and emotion.  In Act 1 she perhaps played the role with more confidence than might be expected of a demure and innocent fifteen-year old Japanese girl (even for a Geisha).  In Act 2 and 3 she was magnificent, and demonstrated that she is a fine actress as well.  She was at her most commanding during the Humming Chorus when she knelt silently throughout the night waiting for Pinkerton’s return with her maid and son asleep by her side.

Pinkerton is basically a youthful and chauvinistic coward, and James Egglestone played and sang him to arresting perfection.  No mean feat.  His fine tenor voice was the perfect accompaniment for Butterfly during the love duet in Act 1, and his final aria in Act 3 during which he expresses remorse for abandoning Butterfly was vocally impressive but his stagecraft was a little melodramatic.

In the 1996 State Opera production, Adam Goodburn and Catriona Barr also sang the roles of Goro and Suzuki, and since then their voices have matured into fine instruments.  They are both fine actors, especially Goodburn who breathed unusual life into Goro.  Douglas McNicol played the empathetic but essentially spineless American Consul Sharpless with accomplishment.  Rounding out the fine cast was Desireee Frahn (a powerful and emotional cameo performance), Luke Gabbedy (fabulous voice and an even more fabulous costume as Prince Yamadori), Steven Gallop (imposingly menacing as The Bonze), David Perry and Jeremy Tatchell.

The production was well designed by Russell Cohen, and it was a work of minimalist perfection with raised platforms placed in a large shallow pool of water enclosed with sliding walls of bamboo and paper.  It did however seem cavernous at times.  Robert Bryan’s lighting design largely comprised of un-fussed monochromatic hues which always threw the emphasis on the actors, and especially on the loneliness of Butterfly.  The night sky scenes were pure magic.

The Adelaide Symphony Orchestra was tightly under the control of the experienced Nicolas Braithwaite and the result was exciting – a textured performance which rarely overwhelmed the soloists.

This is not a production to miss.  Two performances to go – secure your tickets!

When: 23 to 30 Nov
Where: Festival Theatre
Bookings: bass.net.au