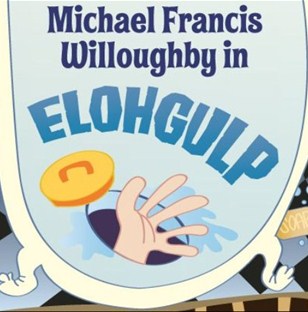 As any parent will tell you, there are enduring figments of the imagination that still to this day strike fear in the hearts of children. The monster hiding under the bed when the lights go out first comes to mind, as does growing a tree inside their belly if they eat an apple seed. But an absolute staple would have to be getting sucked down the plughole during bath time. However, Elohgulp teaches kids that falling down the drain is not nearly as scary as the gunk humans carelessly dispose of in our waterways everyday.

Michael Francis Willoughby (Craig Alexander) is bathing one night, and being urged by his bickering parents to hop out at once. When they make good on their threat to pull the plug, Michael finds himself in the world of Elohgulp where he encounters the strange creatures that faithfully work to sort the waste coming down from the bathrooms “up there”.

While the Drits gather the waste, the Assupods (designed by Sarah Kreigler) work out what to do with it. But there is one other type of dreaded creature called The Gludse, which is made up of the most toxic bathroom end products, and it’s on the loose in Elohgulp. Thinking Michael is a Gludse, the Assupods order him and his rubber ducky (designed by Pilar Rojas) to find the Gludse in order to prove he’s not one himself. Along the way, Michael finds out about the long history of Elohgulp, and how people like him from the bathrooms ‘up there’ are contributing to the problem of the Gludse’s.

An all-adult cast, Alexander features as the only human character in this production, with the rest on puppet duty as the creatures of Elohgulp. While quite rudimentary in their design, the puppets were actually quite endearing creations, thanks the skilful handling and interpretation by Caroline Simone O’Brien, Barb Barnett, Raoul Craemer and Alexander (as the rubber ducky).

While one might think such a show could potentially be quite preachy, environmentally speaking, the underlying eco messages were actually very subtle. Moreover, the messages were not limited simply to the consequences of pollution, but rather broader positive reinforcements regarding family, friendship and facing your fears.

While the storyline was age-appropriate, it was most certainly not dumbed down. The imaginative and ‘jumbledygook’-rich script by Chris Thompson was actually quite complex and intriguing in parts, and the interweaving storylines made for thought-provoking as well as entertaining theatre.

Great care was also taken ensuring the set (designed by David Hope) was a place where children could fully immerse themselves, with the audience required to crouch their way through a creatively constructed drainpipe (by Daniel Mapp-Moroni) on their way into the Courtyard Studio – this would be used as the same drainpipe that Michael and his ducky would tumble out of, clad in his snorkel and towels.

The lighting by Alister Emerson was also a strong feature of the production, with everyday items carefully recrafted and utilised to illuminate this strange little underground world. Some of the lighting actually doubled quite innovatively as the puppets, giving the sense that anything in Elohgulp could come to life at any given moment.  This effect was complemented by Ian Blake’s playful sound design, which kept the mood at just the right tone so as to avoid alarming the little ones.

Elohgulp is a clever piece of children’s theatre that spruiks social responsibility without harping on about it. It’s an ideal conversation starter for parents to discuss the realities of human induced destruction of the environment in a non-confronting way, because let’s face it - with all the monsters, tummy trees and plugholes, children have enough to be frightened of!

When: 28 Sep to 12 Oct
Where: The Canberra Theatre Centre
Bookings: canberratheatrecentre.com.au