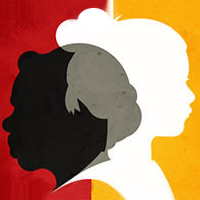 Many good things cross the Nullarbor and among the writers, it’s Tim Winton and Andrew Bovell who best reflect on the Australian experience with right-between-the-eyes story telling.  Bovell has the additional good sense to settle here in Willunga, having tired of New York and Kalgoorlie.  The movie buffs will be linking Lantana and Strictly Ballroom with the Bovell oeuvre.

Bovell's Holy Day was commissioned back in 2001 by State Theatre, and Rosalba Clemente directed the world premiere.  In the early 1800s, a missionary's wife seeks succor at a traveller's rest on the fringe of pastoral settlement with a tale of conflagration at the hands of the local blacks.  Coincidentally, a trio of roughs take lodging while looking for work.  Bovell makes quite sure that everyone has an agenda, and another secret agenda as well.  Almost every single gut-wrenching horrible thing that you could think of that has happened when our cultures collided and persons acted on their needs with impunity, happens.  It's not hard to read the references to the modern analogues of death in custody, the stolen generation, and "A dingo's got my baby!"  Holy Day is part of our awakening to the violence in Australian history and questions what it means to build a nation, as well as being a darn good drama.

The first thing that will impress you is Normajeane Ohlsson's rustic set.  Director John Graham's smart casting is next. Brant Eustice plays the damaged ex-convict with conviction and menace.  His Goundry is wonderfully pathetic, evil and damaged.  Bravo!  Cate Rogers was a palpable publican but left many emotional moments unfortified.  Carissa Lee has now twice played the waif Obedience for free, and was highly convincing.  Robert Bell's Cornelius suffered dreadfully in silence.  Matt Houston and Steve Marvanek made their Epstein and Wakefield struggle to maintain some morality in this God-forsaken situation.  Fiona Lardner as the missionary's wife mistook hiding her character's feelings with having none.  I've got little idea what an early nineteenth century Aborigine living on the fringe of the white fellas would act like, and I don't think Nicolle Orr and John Graham did either.

The play was a sensation in 2001 because of how frankly it revealed, like Wakefield says, things that no longer ought to be spoken of.  Lest we forget.  This is an edgy and compelling production of an Australian classic.

When: 5 to 19 Oct
Where: The Little Theatre
Bookings: trybooking.com