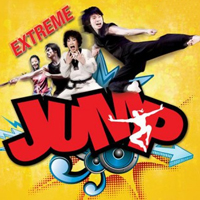 Extreme Jump by Yegam Theatre Company is high octane, martial arts infused, slapstick, comic book, comedy on steroids, and it is an absolute hoot!  The season, like all events in OzAsia, is extremely short and if you missed Extreme Jump then you will need to wait until next time the company comes down under.  They’ve been here before, so hopefully they will visit again.

The Festival Theatre was packed, and the near capacity audience ranged in ages from nine to ninety.  It was family entertainment with a bold, underlined, capital ‘E’!

The company of nine play the roles of an extended family and the show consists of a series of vignettes that give us a glimpse into their madcap adventures which run at a phenomenal pace.  The characters are extreme – everything they do is athletic and violent, but it’s oh so funny and totally inoffensive.  A feature of their antics is the sound effects of their fight scenes: WHAM! WHOOSH! KATHUMP! KAPOW!  It’s straight out of superhero comic books, and the story lines are almost as silly, but who cares.  It’s pure fun. Their timing is also exquisite.

Everything is controlled near misses and nobody, but nobody, gets hurt at all; apart from the audience who end up aching because they laugh so much!

The production elements are excellent.  The set is expansive and colourful, and the lighting and sound is very effective and precise.  Without an interval the show is a generous 90 minutes which could probably have been trimmed.  The opening routine was engaging and included some audience participation, but was probably a little too long.

Yegam Theatre is internationally famous, and has played all over the world to rave reviews.  They deserve it.  It’s an Asian version of Cirque du Soleil, but without most of the equipment and gimmicks; it is pure adrenalin, physicality, sinewy athletic bodies, an unpretentious plot, and forget-your-troubles pure enjoyment.

Do see them next time!