From a Black Sky 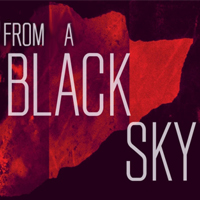 2013 not only marks the Centenary of Canberra, but also the tenth anniversary of the raging bushfires that tore through the Capital claiming four lives and hundreds of homes.

Partially inspired by a survivor’s personal experience of the catastrophe, From a Black Sky is a fictional story that draws upon the Canberra bushfires as a backdrop to this operatic melodrama.

The production begins on a sweltering summer day in a shopping precinct where the public, and two couples in particular, are going about their everyday business.  A scene disturbingly reminiscent of The Stepford Wives, we also discover in this story there is scandal beneath the superficial exterior of their ideal lives.

David (David Rogers-Smith) is a public servant who has lost his job, but hasn’t told his wife, Amelia (Rachael Duncan), despite their finances being at breaking point and their home insurance lapsing. Tony (Don Bemrose) is responsible for David losing his job, but also his friend, and warns him of the imminent danger to his home. Meanwhile, Tony’s wife Sophie (Judith Dodsworth) is having a passionate affair with Amelia and, in the throes of passion, they are incredulous to the fact that Canberra is burning down around them.

When the emergency turns into national disaster, the reality of the looming danger sinks in and only then do the four seriously consider their option to stay and defend or leave and lose their homes. Wracked with jealousy, Sophie shames David into staying at his home, where he soon perishes. With the community standing shell shocked among the ashes, the survivors are then left to pick up the pieces and live with the aftermath of the destruction to their homes and their lives.

What struck me about From a Black Sky is how uncomfortable I felt about having a setting so familiar to me presented back in this intensely dramatised and reductionist fashion. While this happens in operas the world over, experiencing it in your own context is a foreign experience indeed.

Furthermore, and this may be a product of my semi-rural upbringing, the histrionic middle Australia commotion superimposed over the very sober reality of the Canberra bushfires was not entirely emotionally moving – rather, it seemed a little indulgent in the scheme of things and to some extent trivialised the actual events in 2003, even with the impact of excerpts from actual ABC emergency updates.

Singing opera in Australian English also had its challenges - the English language accompanied by our strine and peppered with our unique lexicon have never really served as elegant expressions in the performing arts. Rather, this experiment translated into a rather clumsy and somewhat cringe worthy outcome that made it hard to decipher whether a given scenario was tragedy or comedy.

From a Dark Sky would have been much more effective as a musical, where it would have been given the freedom and flexibility to become a much more nuanced and appropriate production for the background subject matter.

This is not to say that the vocal performances of From a Black Sky weren’t brilliant. While creating this production around the medium of opera wasn’t the best choice in my opinion, Rogers-Smith, Duncan, Dodsworth and Bemrose are in their own rights fiercely talented, and each gave their heart and soul to their parts despite the mismatch. Also backed by a strong chorus and a selection of gifted children and teenagers from local schools, the issue was never a lack of capacity and spirit.

The orchestra, led by Rowan Harvey Martin, executed the composer, Sandra France’s original and quirky score with gusto and were physically a central feature of the production, nestled right in the middle of the stage.

While quite a threadbare set design, it was also one with a lot of utility and the space, with the sizable cast, was maximised to its full potential without looking chaotic. Without a single set change, we were transported between houses and around the ACT to a number of locations, with characters popping out of every nook and cranny along the way.

It would have been great to see a little bit more of Canberra’s character in From a Black Sky – yes, the point was to exemplify how such a horrific incident could unfold in sleepy little Canberra, but some added cultural references could have been injected to make the whole show more endearing.

Witnessing the warm and rapturous reception of the audience at the show’s conclusion, it dawned on me that opera in this particular context might simply be an acquired taste for those who aren’t aficionados – something that grows on you. In saying that, it didn’t whet my appetite, but there were certainly plenty of satisfied people walking out of the theatre that evening.