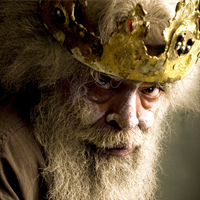 As Australia’s Indigenous people continue to be overrepresented in our justice system, attention is turning to a concept known as justice reinvestment – investing more public money into addressing the causes of Indigenous offending rather than punishing them after the fact.

Jack Charles is a case in point. Part of the Stolen Generation, he suffered the loss of his family and Indigenous identity, and endured abuse at the hands of the institution that was tasked with his care. Heroin proved to be an effective analgesic for his intense emotional trauma, and led to a life of petty crime to feed his habit.

This downward spiral was captured in the 2009 documentary, Bastardy; a confronting and candid fly on the wall journey through the lowest points of Charles’s life. Alternatively, Jack Charles v The Crown, devised by Charles, writer John Romeril and director Rachael Maza around a kitchen table, is an elegantly scripted retrospective on these dark days, seeking to explore the broader social issues that led him down that path.

A multi-media and multi performance genre production, the show begins with snippets from Bastardy projected onto the warmly lit set created by Emily Barrie and Danny Pettingil, resembling something of a humble but homely sanctuary.  The clips provided much context and contrast to the picture of serenity with the distinguished white bushy beard now sitting in front of us at a pottery wheel mastering the soothing craft he first learned in prison.

Barely stopping to draw breath, Charles with his trademark elocution escorts the audience through an articulate account of his life story. In a monologue style reminiscent of beat poetry we are taken through his formative years living in boy’s homes, his fame as a performer and pioneer in the entertainment industry, and inevitably his infamy as he succumbed to the needle.  Alluding to his experience of suffering Post-Traumatic Stress Disorder and inner conflicts surrounding his sexuality, one can conclude his was a case of self-medication rather than self-indulgence.

However, Jack Charles v The Crown is not simply a theatrical autobiography. After his many years of interaction with the Australian justice system, Charles utilises his courtroom experience to launch a politically symbolic trial against the Crown during his trip to Canberra.

The crux of his profound and beautifully crafted argument was that of the difference between white and black law; traditionally, black law punishes offenders, but once that punishment has been served the offender is once again integrated into the community. White law however punishes twice, first through incarceration and then through social exclusion and stigma.

Having experienced that stigma as a free man, this was a plea by Charles for a rethink of our justice system regarding the consideration of social context and the need to view people as works in progress – not simply good or bad. This was summed up by a powerful visual metaphor consisting of a jarrah headstone engraved with only the number he had been assigned in prison, highlighting the enduring loss of humanity experienced by inmates.

While this production has been around for a number of years, it resurfaced in Canberra as part of the Collected Works series for the capital’s centenary. However, it also continues to evolve alongside Charles’s personal experiences. Throughout these years he has forged a deeper connection with his Indigenous history and culture and began to reclaim his stolen identity; a sense of hope radiating from within.

This was distilled in his musical version of Oodgeroo Noonuccal’s poem, Son of Mine, pulling out an acoustic guitar and showcasing his deep and weathered vocal talent and followed by Leadbelly’s, Where Did You Sleep Last Night. However, being steeped in Anglo-Saxon culture of the 1950s, the show somewhat curiously concluded with a cover of Love Letters in the Sand, that Charles firmly put his stamp on and made entirely his own.

The band, consisting of Nigel Maclean on guitar and rocking out the electric violin, Phil Collings on percussion and Mal Beveridge on bass, provided a brilliant ambience for the production. From their seedy interludes to their role as full- blown backing band, they were the hallmark of professionalism in bringing Charles’s story to life.

On the whole, Jack Charles v The Crown is brimming with the wisdom that only a survivor could possibly impart.  But although this is done with great humour and wit, it most essentially delivers a critical message about Australia’s justice system that is more relevant than ever to our times. Walking casually off the stage with a subtle jazz-hands farewell seemed to say his desire to convey this message through the medium of theatre was well and truly satisfied.

When: Closed
Where: The Canberra Theatre Centre
Bookings: Closed