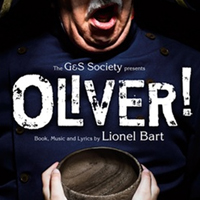 The Gilbert and Sullivan Society’s production of Oliver! is visually splendid.  Director David Lampard’s scenic design is inventive and evocative of Dickensian London.  Movable walls and trucked furniture items are swiftly moved around by the cast and the well-rehearsed crew to allow the action to move fluidly between diverse settings. It was a joy to behold.

Daniel Barber’s superb lighting design was a major highlight of the production.  It enabled the set to perform exactly as intended, and Mark Wickett’s projections, introduced at strategic moments, greatly added to the professional look and feel of the entire production.

Gigi D’Angelo’s costuming was colorful and added to the caricature of a number of the characters, particularly Mr Bumble and Widow Corney.  Perhaps Oliver, the Artful Dodger, Fagin and his team of urchins were a little too clean and well dressed than befitted their station in life.

The roles of Oliver and the Dodger are to be shared over the season and opening night saw Jack Raftopoulos in the tile role and Isaiah Fabbro as the Dodger.  Fabbro was engaging as the Dodger but could have been more conniving and false-hearted.  Fabbro’s Dodger came across as being more mischievous than criminal, and a little on the young side, but one could not fault his enthusiasm, vigour and talent, and he surely has a bright future on the stage. Like Fabbro, Raftopoulos has a sweet voice that delighted the audience.  His rendition of ‘Where is Love?’ was rewarded with thunderous applause but it didn’t quite carry the depth of emotional baggage that naturally goes with the song.  The preceding scenes needed to show Oliver’s emotional isolation and desperate physical circumstances much more palpably.

Raftopoulos and Fabbro were ably supported by an enthusiastic and tuneful youth ensemble that played various workhouse orphans, urchins and pickpockets with great gusto.

Unusually, Fagin was played without a beard and with a bald head.  That aside, Rod Schultz was commanding in the role and his ‘Reviewing the Situation’ was a highlight of the show.  Schultz has a fine baritone character voice and deftly combined it with some enjoyable choreography; the clarinet accompaniment from musical director Peter Johns’ very tight orchestra was masterful.

Paul Talbot’s imposing frame gave sufficient menace to the role of Bill Sikes, even if his dog Bullseye, who was played by an extremely well behaved and placid pooch by the name of Sushine, looked a little too cared for.  After all, Sikes was meant to have badly mistreated the poor animal.  Emma Bargery played his prostitute girlfriend Nancy, and it’s a tough role to play well. Perhaps the hardest aspect of it is to convincingly portray being a helpless victim who repeatedly makes wrong choices out of a tragically misplaced sense of loyalty.  The lead up to ‘As Long as He Needs Me’ is all important, and Lampard’s direction got close to establishing the right tone and mood for the song to be meaningful.  Bargery sang strongly, and with a marked common accent to underline her depressing and downtrodden origins, but this seemed to emerge just in time for the song rather than being established much earlier.

John Greene as Mr Bumble and Bev Shean as the Widow Corney were delightful and every bit larger than life.  Shean oozed every characteristic of a wife that makes a man wish he had never married in the first place.  She is just terrific.

But acting honors go to director David Lampard himself.  His Mr Sowerberry was a stock lesson in how to extract everything that can possibly be extracted from a role, and he was well complemented by Vanessa Lee Shirley who was also strong as Mrs Sowerberry.

This production has many things to commend it, and with opening night nerves and tentativeness out of the way, it should continue to wow audiences.

When: 19 to 27 Jul
Where: The Arts Theatre
Bookings: gandssa.com.au