Chaplin: A Life in Concert 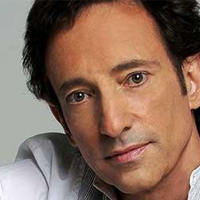 The show seems about to open, but this guy comes out, dressed in black, and I think he's going to say David Pomeranz missed his flight, or has the flu, and won't be able to perform.  But no, it is David Pomeranz and he says he's going to do his Chaplin musical and asks the audience to "imagine" along with him.  Then he goes off stage and I'm thinking how long is it going to take for him to put on the funny moustache and the badly fitting suit and the huge shoes on the wrong feet, but no, he comes back out forthwith and we are suddenly in the company of the aged Charles Chaplin back in America for the first time since he was barred from the US, to receive a lifetime achievement Oscar at the 1972 Academy Awards.  And by golly, his persona seemed like the Charlie Chaplin I remember watching at this momentous event in 1972.

I suppose this is a failed musical in the sense that poor old Pomeranz has not convinced a Broadway producer to launch on the big stage, and he has cut it down to a one man show with a few slides, voiceovers and canned piano, but mostly it's him tickling the 88s and segueing with himself.  His Chaplin is absolutely exquisite and believable.  A charming, quiet man who had new ideas for comedy in the silent era and as we know, revolutionised it.  While Pomeranz eulogises Chaplin, we do see the great man's penchant for marrying much younger than his age and his refusal to accept talking film as the new art form.  We only see the Little Tramp for a brief time at the moment of discovery of this character, as we are instead in the company of Chaplin the man - the hard worker writing at his piano, the naive political idealist, and his married life.  Pomeranz provides us with copious delectable examples of Chaplin's mimicry, mime and comic style in sweet and sudden vignettes.

Pomeranz clearly loves his subject matter and spread the love on opening night.  And by the way, it's all done in the format of a sometimes manic one-man musical with his own piano accompaniment.  Bravo!

When: 12 to 14 Jun
Where: Festival Theatre Stage
Bookings: bass.net.at