The School for Wives 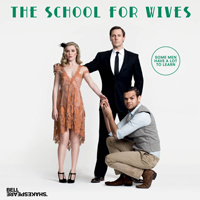 By Moliere. Produced by Bell Shakespeare, directed by Lee Lewis and translated by Justin Fleming

First staged at the Palais Royale in Paris during 1662, it’s really quite astounding to see how accessible the bold themes and penetrating insights that lay within Moliere’s The School for Wives can be to a modern audience some 350 years later.

Translated from its native French and adapted with an unmistakeably Australian twist by Justin Fleming, Bell Shakespeare’s version of this antique comedy transports its characters to Paris in the liberating, post-war 1920s.

The School for Wives centres around a wealthy businessman called Arnolde (John Adam), who generally disdains women and is intensely paranoid about marrying someone who will cheat and make a fool of him. His solution is to buy a young girl from a destitute woman and promptly send her to a convent to be raised as the perfect wife - in ignorance of the real world.

When Agnes (Harriet Dyer) is of marrying age, Arnolde (who changes his name to Monsieur de la Souche to sound more noble) moves her into one of his houses in preparation for the wedding, keeping her imprisoned and isolated from outside influences.

However, after returning home from a trip, he soon finds that Agnes has been receiving amorous visits from his friend Laurence’s (Mark Jones) young son Horace (Meyne Wyatt), who has no idea that Arnolde is actually the dastardly Monsieur de la Souche and subsequently confides in him his plan to rescue Agnes from her incarceration.

Meanwhile, Agnes is blossoming from the love she receives from Horace, and despite her years of social and intellectual deprivation, turns out to possess an innate and innocent wisdom that completely disarms her captor.

Aiding Arnolde in foiling Horace’s scheme are his bumbling Spanish/Portuguese servants, Alan (Andrew Johnston) and Georgette (Alexandra Aldrich), who ensure all his efforts are ultimately in vain. Johnston and Aldrich are absolutely hysterical in their respective roles, stepping up to make an exceptional comic duo. Beneath their slapstick antics and caricature-like facial expressions is a sophisticated and well-honed knack for the absurd, with the pair showcasing a brilliant rapport.

Dyer is simply a joy and delight as Agnes the daffy ‘idiot savante’, perfectly capturing her initial awkward naivety and vacancy through a refreshingly dry humour that caught people off-guard but subsequently had them doubled over with laughter. Equally, Dyer completely had the audience charmed throughout Agnes's sweet transformation from shy innocent to a knowing woman in love.

Adam is distinguished as the insecure and controlling Arnolde, capably anchoring the cast with his presence as leading man and conveying the mass of increasingly turbulent emotions in the agitated protagonist to great physical effect, while maintaining a dark comedic edge.

In contrast, Wyatt exudes youthful energy and charm aplenty as the clueless and starry-eyed Horace, his sunny exuberance providing the perfect antithesis to Arnolde’s broody cynicism.

Utilising an innovative, multi-purpose set by Marg Horwell featuring a silent movie-type ambience (complete with a playful Mark Jones on piano and wacky sound effects duty), the audience was kept consistently amused by the quick succession of changes in scenery and novel uses of props during this two-hour plus, production.

Overall, Bell Shakespeare’s The School for Wives takes the best of old and new theatre, jazzing up the solid foundations of Moliere’s cheeky work to create a colloquial but faithful production that thoroughly titillated the audience. If you’re just starting to come out of hibernation from the Canberra winter, this is the perfect show to uplift your mood for the Spring that awaits.

When: 25 Sep to 6 Oct 2012
Where: The Canberra Theatre
Bookings: canberratheatrecentre.com.au