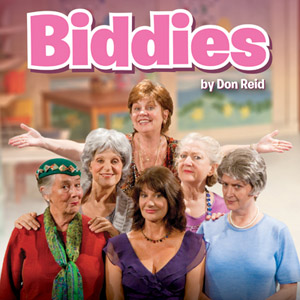 You can only fight ageing for so long before you have to come to terms with the fact that nature will ultimately win the battle – so instead of bemoaning the fact, this vibrant bunch of women “of a certain age” have come together to embrace their emerging biddy-ness.

During a session of “Stitch and Bitch”, creating some cushions for their old school chapel, Connie, the wild child of the group and sometime amateur actor, convinces the ladies to put on a play together as a way to spice up their lives.

While there’s some initial resistance from the more reserved Ruth and the severely incontinent Beryl, Connie, the excitable Jess and the older, but intellectually feisty Agnes manage to inspire them enough to begin rehearsals – and so in this unrestrained environment the truth about their supposedly ordinary lives to date unfolds.

But just when they start feeling good about themselves, a highly influential but cynical former school teacher (Vivienne Garrett) pays them a visit at Inglehurst while putting together the performance, berating their so-called failure to reach their potential and poor choices, cutting them down one-by-one.

This may have worked when they were girls, but now they are women they find this an opportunity to exorcise this old demon from their past and take ownership of who are what they find most important in life – emboldening them to take action on those problems they’ve been sweeping under the carpet.

Interestingly written by an older male (Don Reid), Biddies manages to steer clear of overt stereotypes, and shows quite a lot of depth, variance and fondness in the female character development for this particular age group and demographic. Reid too explores issues as broad as cross-dressing husbands, sexual invisibility, domestic violence, lost loves and growing old alone boldly, but also with great taste and dignity – something very often denied to the elderly.

The professionally accomplished group of Ozzie femmes in Biddies also proved a joy to watch – bringing a down to earth and “warts and all” stage presence through the uncomplicated narrative, which created an infectious smile throughout the predominately mature audience. It was like receiving a collective, reassuring cuddle from a socially empowered grandma.

This production is a fine example of how the behavioural restrictions placed on those in their twilight in Australia ought to behave are dissipating with the emergence of new technology, the modern norm of women’s liberation and the united front of the baby boomer generation who are refusing to take a back seat in society until they can no longer drive.

Even a young audience could appreciate the sass and spirit in which these ladies embrace their inner biddy, and give at least some hope that growing old will not be the end of life as we know it.

When: 8 to 11 May
Where: The Street Theatre Canberra
Bookings: thestreet.org.au