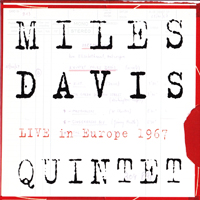 “I'll play it first and tell you what it is later.” – Miles Davis

What more can be written about one of the greatest small Jazz groups of all time?  This band, featuring trumpeter Miles Davis, with saxophonist Wayne Shorter, pianist Herbie Hancock, bassist Ron Carter and drummer Tony Williams has already been extensively documented on CD.  In 1998, Sony Music, through its Columbia / Legacy imprint, released all of the band’s studio recordings in the 6 CD set Miles Davis Quintet: 1965 – 1968 (which can currently be bought online for under $30), while in 1995, their two-night 1965 stay at the Plugged Nickel club in Chicago was released in unedited form as an 8 CD set.  Sony Music has now returned to this band’s output by devising a release comprised of material recorded when the band toured Europe as part of promoter George Wein’s ‘Newport Jazz Festival in Europe’.  The result is this 3 CD and 1 DVD set that features material recorded in five different countries, Belgium, Denmark, and France for the CDs; while the DVD includes two sets filmed for television in Germany and Sweden.

The music on this set has a lot to live up to, 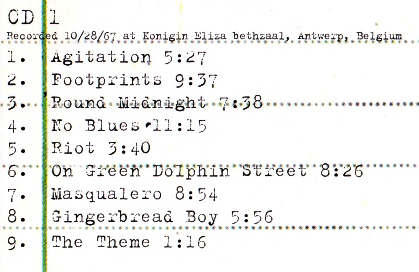 as the Plugged Nickel box is considered one of the best live jazz recordings of all time; with the last seven editions of the Penguin Guide to Jazz listing the box as a ‘Crown Album’.  The music on this set does not disappoint, but it is astonishingly different to the music on that earlier box.  While the Plugged Nickel set documents the band endless riffing mainly on established ballads and Jazz standards, this new set reveals the band exploring its own originals (of course many would become standards over time).  The set list varies little over each set.  We get five versions each of Davis’ Agitation from the 1965 album E.S.P., and Shorter’s Footprints, from the 1966 album Miles Smiles and his own Blue Note LP Adam’s Apple, here taken at a much faster tempo.  Shorter also provides Masqualero, which Davis continued to play in the early 1970s, while Hancock contributes Riot, which this band recorded earlier in the year on Nefertiti, and Hancock would include on his 1968 Blue Note masterpiece Speak Like a Child.

While the set list varies little, the band’s take on the songs is wildly inventive and unpredictable.  In fact the band’s signature is the (seemingly paradoxical) tendency for extreme variation within structure. The band plays similar sets, and the solos are always in the order (Davis, Shorter, Hancock), but what takes precedence is the sound, instead of individual tracks.  To emphasise this, the tracks just blend, with Davis simply playing the head of a new track to designate the shift to something new.  Davis plays the start of The Theme, which was his traditional way of closing sets since the mid-1950s. 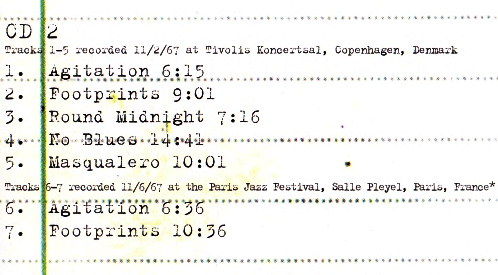 variation of tempo and dynamic interplay, which is faithfully rendered thanks to the restrained digital mastering by Mark Wilder and Maria Triana.  At various times the performers are not afraid to just sit out and reduce the band to a trio or duet.  One of those most thrilling moments features on the only version of Walkin’ (a track Davis recorded in the studio 13 years previous), where Shorter simply solos on his own for two minutes, yet he phrases his notes in a way that keeps a pseudo version of the rhythm in your mind.  Shorter’s contribution is rewarded with applause, before Hancock also takes an unaccompanied solo, which is followed by the rest of the band returning in full swing mode for the last minute to end the track.

The stand out contribution from the rhythm section comes from Tony Williams, as his drumming brings astonishing intensity to the music.  Whether working an array of polyrhythms on the ride cymbal, intervening in a solo with abrupt hits of the snare, or using the hi-hat as a makeshift crash cymbal, Williams gives this music the forthright intensity that he would use in the future to drive his Lifetime Jazz-Fusion band.  Williams knows to tone things down when Hancock solos, so he often reverts to rim shots, or surprisingly souped up funkiness on the hi-hat.  When Shorter solos, Williams often provides the works, as he pushes the saxophonist to a range of audial contortions.  For some reason cooking analogies come to mind, as if Williams is vigorously preparing a meal in a crowded kitchen.  Williams, who was just 22 when this music was recorded, has said he was listening more to rock music than Jazz during this period, which is easy to detect from his playing.

The contributions of Hancock and 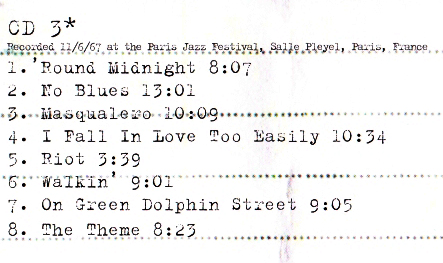 Carter are more restrained, with Hancock in particular often demonstrating the beautifully relaxing playing that he featured on his early Blue Note LPs, notably Maiden Voyage and Empyrean Isles.

The main standard present on this set is Thelonious Monk’s ballad ‘Round Midnight, which reveals the biggest differences between this set and the Plugged Nickel performances.  The earlier performances were hastily arranged shortly after Davis had discharged himself from hospital following hip replacement surgery.  As interesting as those performances are, it is clear that Davis wasn’t in the best health or form (but as saxophonist Gerry Mulligan once reflected, a weak Davis is more eloquent than many stronger trumpeters).  Shorter is the star of the Plugged Nickel sets, whereas this new release finds both players on equal terms.  Davis’ introductions to ‘Round Midnight (which are essentially duets with Hancock) in particular feature a strong yet soulful tone that he would sustain into the early 1970s.

The music on this collection is influenced by the modal Jazz that Davis introduced on King of Blue, but unlike the ground-breaking music on that album, this set isn’t suitable for relaxing while eating a meal, reading a book, or enjoying a late night tipple.  The at times intense, fiery interplay, and sense of anticipation created by the constant variation within structure of this music demands attention.

Some have categorised mid-1960s, yet 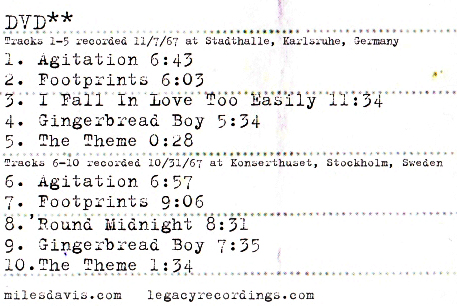 pre-Fusion, Davis as “Free Bop”, because of the mixing of post-bop with Free Jazz idioms, but – as Davis implies in the epigraphical quote – labels don’t really matter much – because they always ultimately apply general categories to specific types.  The music on this set reveals that there are no distinct ‘species’ amongst Davis’ oeuvre, as what we actually hear is a large collection of intermediate forms.  This music contains elements from Davis’ past, variations on the present (the different takes on Footprints), and clues to the early electric fusion of Filles De Kilimanjaro, and the proto-ambient album In A Silent Way.  The main thing that unifies it is the intelligent design of Miles Dewey Davis III.

The sound quality of this set varies from very good to excellent.  Davis’ record label Columbia didn’t record any of the material presented here, hence it has been released as part of the new “Bootleg Series”.  Sony has relied on the original audio and black and white video master tapes from various European radio and TV stations that recorded the shows for broadcast.  The sound is in mono, but who needs stereo when the music is of such high quality!  Sometimes the instruments are not mixed as well as they would be in a studio environment, but this just gives the performances a more ‘documentary’ feel as if you are there listening to the pieces, as all the variations unfold.

The box is available online for under $30, which is a steal given that it features just under 5 hours of material.  Sony / Legacy have used the “Bootleg Series” moniker for other artists, such as a plethora of releases by Bob Dylan, so let’s hope they follow this up with many more releases for Davis.  The Holy Grail for Davis’ collectors is a box featuring all the shows of the 1975 tour of Japan

This set is highly recommended for any Jazz fan, but really it could be appreciated by anyone who likes what The Onion calls “a mode of creative expression consisting of sound and silence expressed through time”; i.e. music.