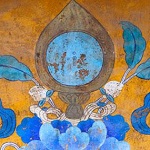 Straddling both sides of the Himalayan Mountains, Raga Shambhala transports a small piece of these far-off-lands to the Space Theatre for this year’s Oz Asia Festival.

Split into halves, the Raga representing India and the Shambhala representing Tibet, this show presented Adelaideans with two unique opportunities: to re-experience the beautiful music of Tibetan-born, Queensland-based Tenzin Choegyal; and to see rani of the sitar, Manju Mehta, in action for the first time.

Shambhala, a reference to "the pure land" or "mystical land" in Tibetan Buddhist tradition, focussed on the music of Choegyal.  Together with Dabgar and Bennett, he presented a set of original material in his soothing and beautifully raw vocal style and accompanying dranyen.  Trembling and soaring in the nomadic Tibetan style, his voice is magical.  It calls to you from far away, pulling you all the way to the plains of his homeland.

Choegyal is animated on stage, smiling, tapping his foot and radiating a sense of warmth and of peace.  Though not sung in English, you don't need to understand his words to grasp their meaning, as it is written on his face and in his voice.  He sings with his heart on his sleeve, hiding nothing from the audience. As Choegyal often gazed up and into the distance during the set, you found yourself wishing to see what it was that he saw.

During the show's first half we were also treated to a sample of Bennett's jazz-infused, east-meets-west guitar work with an extract from 'Echos of You'.  Written for his 2010 performance at the Adelaide Guitar Festival, it was given a new life with Dabgar and Choegyal's accompaniment.

The show’s second half saw a location shift over the Himalayas to India.  A Sanskrit word with a literal translation of "colour", Raga is also used to mean "beauty” or “melody" - an aptly chosen title.

Compromising an instrumental set of North Indian classical music, Raga was led by Bennett's Guru and renowned sitar master Manju Mehta.  Hailing from a rare breed of female sitarists, Mehta was the epitome of beauty and grace as she sat gently atop the carpeted stage, drawing her song from the complex instrument.

As an audience member you were struck by not only her talent, but her strength and endurance.  She played with speed and finesse for 45 minutes almost without pause. The combination of Mehta and Bennett's sitar mastery matched with Dabgar's equally intense drumming was memorising, stealing away the time as your mind was lulled into quiet respite.

Raga Shambhala is a wonderful taste of two cultures that, in a world obsessed only with the tangible, manage to keep hold of their mysticism and spiritualism.  It made you long for those warm, dusty Womadelaide summer days - or even just for one more hour in the Space Theatre, wading in a peaceful enjoyment of beautiful music.