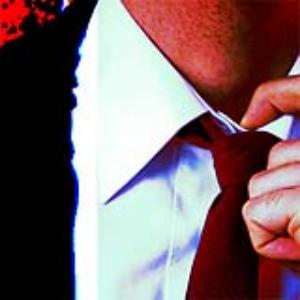 Two men sit in a room, one there to receive the Cut, the other to perform it. The receiver is desperately convinced of what he desires, but can the other do it? Should he do it? What kind of person does it make him if he does?

In Mark Ravenhill's The Cut, the audience is transported to a dangerous and manipulated society ruled by political and religious zeal. Here, displays of emotion are considered inappropriate and good citizens keep their eyes open to avoid the internal monologue of contemplation and philosophical thought. Those searching for an escape shut theirs in secret defiance, seeking out the void and praying for the Cut.

The story focuses on Paul (Tony Busch) and his personal struggle with his assignment as a Cutter. The position forces him to perform the barbaric processes on others, delivering them immence pain but ultimately freedom. He is forever changed by meeting John (Luke Schubert), who has dreamt of having the Cut since childhood and longs for the enlightened existence he believes it will bring.

This is a wonderfully intriguing play in the style of sci-fi masters George Orwell and Philip K. Dick. It conjures a scary alternate reality where propaganda is king and lives are played out in a superficial bubble, disconnected from free thought, intense emotion or meaningful relationships.

The cast puts in a bevy of excellent performances, in particular Busch and Schubert. Together, they open the piece and embody the confusion, anger and frustration of their characters. Busch impressively maintains Paul's highly emotional state throughout, showing the breadth of his acting as he moves through indignation, anger, frustration, resignation and hopelessness.  Given how mentally exhausted you emerge as an audience member, one can but applaud the stamina and skill of the cast.

With a minimalist set and heavy one-on-one dialogue, it is a powerful show but can feel strung out and difficult at times, largely due to a script jam-packed with half-finished sentences, confused interactions and violent outbursts. The background of this troubled world and it's strangled inhabitants is so lightly touched on it frustrates, leaving you feeling that the full potential of the story is never reached. This combined with the fact that the characters are so intensely conflicted and purposefully disassociative serves to slow the process of connecting with the play's themes.

The Cut is well-directed and performed by cast and crew, but the play itselfl feels like something akin to turning on a movie one-third of the way through and spending the rest of the night trying to piece together the bits you missed. Diehard fans of science fiction might see a modern reinterpretation of a well-worn theme, but there is wisdom and enjoyment to be gleamed from this show.