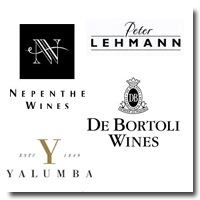 There are some wines that have fallen into the hands of the marketeers and they believe a new label and some old tosh on the origin of the name will fool consumers into paying the price asked.

They do it with smoke and mirrors; what one thinks they see is not in fact what is real, but rather what the manipulator wants one to see. The reviews below cover wines that purport to offer value but, in my opinion, don’t and a few that others that, again in my opinion, do.

Marketing wine is needed but on occasion it can destroy a brand. I fear this is what Australian Vintage has done to Nepenthe Tryst.

They have changed the label to one that is directly stencilled or lasered on to the bottle. Labels are hard to define, with each and everyone’s taste being different. My personal view on this one is that it’s extremely tacky and downmarket. I find myself unsettled by the downgrading of the name Nepenthe. The wine is now called Tryst by Nepenthe, Tryst being in a font three times the size of Nepenthe. A vast swathe of the front has been turned over to the etymology of tryst.

As to the wine it’s fair but nothing outstanding, 89 points and at $17 there are plenty more out there that are more defined in all aspects.

A better wine than the red with plenty of youthful zip. In truth it is a bit too much for me, but that is personal, and I’m sure others will enjoy it more; 90 points and as with the red there are plenty of others around at $17.

Tasted April 2013 and thus far the worst wine of the year, over confected lolly water that I found hard to taste and impossible to drink; 83 points and not worth the $14 asked.

Marginally better than the Shiraz Grenache blend I’m sure I reviewed this range last year and found very acceptable wines, this year it appears to have gone to places where wine should not go; 84 and over priced at $14.

Fruit juice nose and juicy in the mouth, this wine passes across the palate leaving no great impression other than fruit squash. A bit of alcohol kicks in after its swallowed. I’m sure it will find an audience, but unfortunately not in this household; 84 points and $14 is more than I would want to pay. How very disappointed I was with the 3 Peter Lehman wines. All the good that Lehman has built up over the years put at risk, it’s such a shame.

Dark fruit on the nose with that hint of dust that cabernet sauvignon often has, easy in the mouth a even journey and good sound finish 90 points and value at $15

As is well known I’m not a great lover of merlot but this had enough interest in its complexity to keep me interested, after the tasting I had a glass to drink and have to admit I enjoyed it, 90 points and worth $15

Well, well a chardonnay without oak that is good, they are rare. Breaking it down in tasting terms it’s overly impressive but it comes together at the end and is a good glass of wine, a case of the whole being better than the parts 91 points and value at $15

Priced at $15 the 3 wines from Yalumba offer far better value than the Peter Lehmann offering.

Rarely receiving many De Bortoli samples I smiled when this wine turned up in the post. A bottle from their cheapest brand, $7.50 but can be found at $5 on special, the media release said it all - James Halliday had awarded this wine 89 points which is a very good mark for a wine at this price level. It would be nice to say that James got it wrong but he didn’t. It’s a really enjoyable wine and I can’t dismiss his score of 89, in fact I go one higher at 90. Its origin, listed as ‘Australia’, is vague on the label but the notes pin it to Riverina.