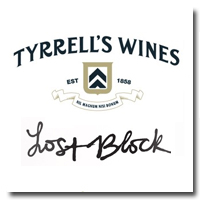 I have been privileged to know three generations of the Tyrrell family, Murray (deceased), current head of the clan Bruce, and his son Chris now involved in the business. There are other family members also involved, Chris’s sister Jane and brother John, but I don’t know them as well.

Murray and Bruce have both gotten into hot water over the past 50 years for expressing forthright views. Often they have made me smile, even laugh, as the Tyrrell's voice what others only think and never say. They are a fine family, widely respected among the wine community and consumers alike.

Their latest brand release is the re-branding and extension of the original Lost Block range. The Lost Block story stems back to a vintage misadventure in 1993 when semillon grapes on a small vineyard block were inadvertently forgotten about at harvest time. After realising the oversight, the ‘lost’ Semillon was eventually picked and Chief Winemaker, Andrew Spinaze created a more approachable, softer style than the classic aged Hunter Semillon.

Sales and Marketing Manager, Mike Cutrupi states, “We decided to move the brand from the more traditional execution in packaging to something that graphically embraces the story of the ‘Lost Block’, with the introduction of a caricature of the vineyard manager, set in a number of winery and vineyard situations, looking for the Lost Block.”

The labels are fun and the wines are as follows. Their full retail price is around $18.

For a Hunter semillon that is this young it’s quite approachable, it still has the bite of young semillon but it’s more a nip than a full on savaging of the palate. 89 points now; it will gather a couple more as it ages a year and then it will be worth the money.

It’s of a style I’m not fond of, but putting that aspect aside and marking as it deserves it’s 91 points and worth the money asked. It’s a wine that lovers of New Zealand Sauvignon Blanc should flock to in droves.

A sound wine, definitely chardonnay, it is easy to drink and enjoyable. Need more be said? 91 points, although there is a lot of good chardonnay around at this price so it might not be the best value on the shelf; it won’t be the worst, however.

This wine has more bite than most merlots and that made it enjoyable when taken to the table. A very sound wine: 91 points and worth the money.

Being picky as I am, I could have done with a touch more edge rather than the roundness this displayed, but that is just me. As a McLaren Vale Cabernet it was good drinking; 92 points and definitely worth its price.

I’ve had better, but it’s not the quality of this wine that was the problem, rather it seemed unsettled at time of tasting. I give it 88 but feel it may be worth more, perhaps a poor bottle for other reasons.