Hamlet In The Other Room 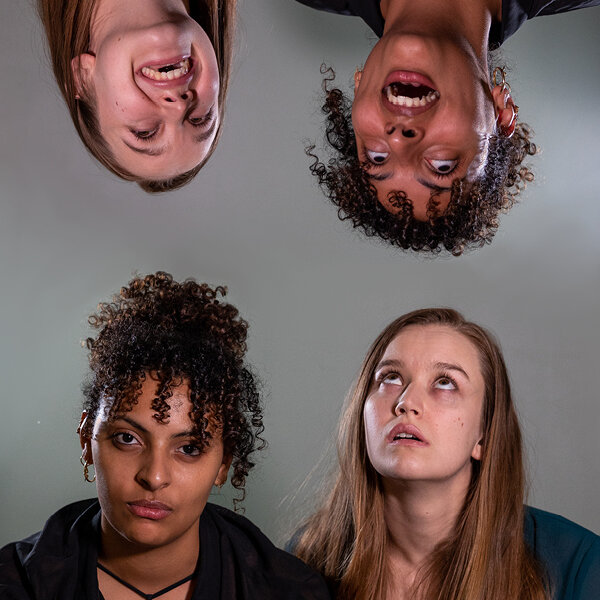 This is my second show reviewing at RUMPUS in Bowden and this is the place for brand new locally created work. Firstly, it’s pleasant seeing how Bowden is shaping up as a community with mixed-style dwellings and ample amenities. The Rumpus Theatre occupies a converted industrial building, and its nooks and crannies are fascinating. The bar area is expansive, and the various sitting areas will remind you of granny’s with its doilies and household antiques and print copies of kitsch paintings. Nostalgic and comforting. The theatre policy includes care to cater to all persons with whatever accessibility or viewing issues.

Hamlet In The Other Room is the debut production of Good Company Theatre. This new local collective has the balls to shake up Shakespeare’s masterwork. No wait, they don’t have the balls because they are all women! The lords become ladies and same-sex relationships abound.

The simple set is bathed in the royal purple and the king’s throne dominates (it’s actually just a retro chair tricked up with trompe l’oeil but it works). Designer Katherine Cooper has the women in modern dress sporting the most fetching combinations of material, style and colour that enhance and differentiate each woman’s native looks – the sparse set is but a vessel for the kinetic kaleidoscope of movement to follow. It is like an original Star Trek TV episode where Captain Kirk beams down onto the planet of creative women in fancy dress.

Aside from design, the play follows the script more or less but alas a few pages go missing. While diction is clear and the verbal and physical work is pacey, it’s not the best Shakespeare. But here is the best part. Starting in earnest with the play-within-the-play scene, director Zola Allen - with all the cast workshopping lead writers’ Lucy Haas-Hennessy’s and Poppy Mee’s original script - challenges the gender, status and other stereotypes of Shakespeare’s age. A good poke in the eye! This is conveyed through many theatrical devices and surprises, including a joint effort of, “To be or not to be…” and builds to a daring crescendo of confronting dance. Bravo!

I know I said that was the best part, but apparently it’s not! At least that is what I was told by the audience members I interviewed after the show. I found it difficult to follow the instructions given in the foyer, so challenged I was by their theatrical anarchy. I didn’t do what many did – you’re supposed to get out of your seat and go down the corridor and into the dressing room. At any time. During performance of Hamlet. Or even start your show in the dressing room, and later move into the theatre. Or is the whole place, including the corridor in between the theatre? Others told me what a dolt I was because I missed the excitement of being a fly-on-the-wall in the dressing room in the presence of the actors’ gay abandon and bon homie during their time off-stage. Can’t say I wasn’t invited.

This is your opportunity, like Alice’s, to go through the looking glass and enjoy a theatrical experience much as a performer would. While I enjoyed getting familiar with the various personae of the cast in performance, seeing them also the dressing room would put a rocket under that experience.

It is the most creative idea I’ve seen in theatre for a long time, and I didn’t see half of it! Bravo! Go see it, twice.