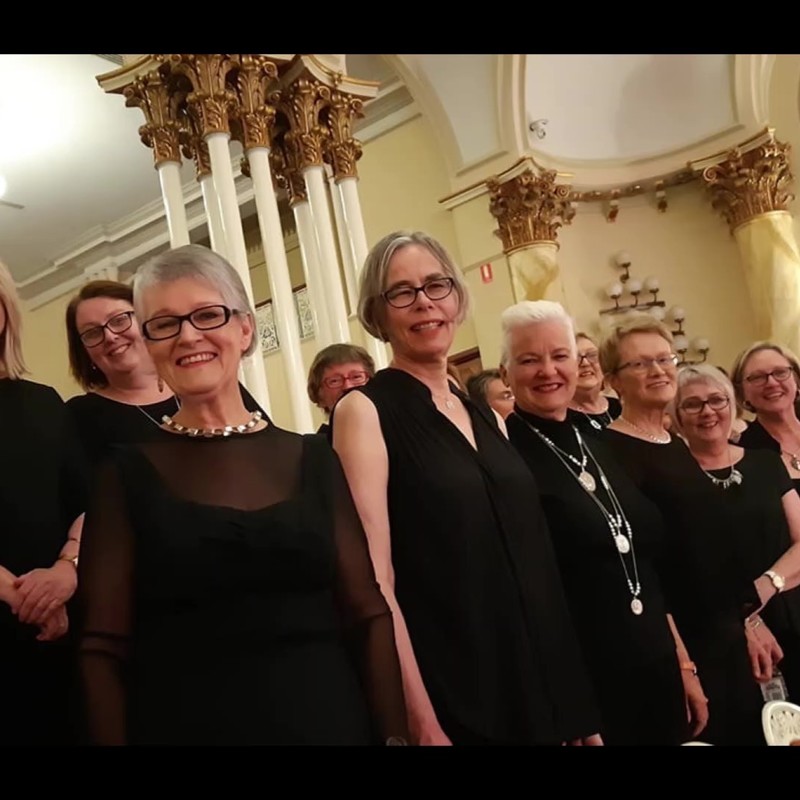 Not sure where the 27 comes from, as this female acapella choir is apparently 35 strong, and from what I could see, there were a few more than 27 gin labels available at the Prohibition Distillery!

Allegria formed in 2008, and specialise in renditions of contemporary composers such as Nick Cave, Paul Kelly and Billy Joel. This concert was dedicated to ‘strong women’ with a handful of prohibition era tunes thrown in to acknowledge the setting; the audience sat in full view of the rather marvellous gin still at the rear of the Prohibition Distillery.

The group opened with Java Jive, which I think was first recorded by the Inkspots, although the King Sisters and Manhattan Transfer also had great versions. Allegria made it their own, casting aside mentions of coffee halfway through and substituting ‘gin’. Clever girls.

A laid back version of The Video’s Trickle Trickle brought out some great harmonies, and narrator Brenton Shaw introduced Adele as one of the strong women they would be celebrating tonight. Rolling In The Deep, a big song at any time, revealed some of the vocal shortcomings in the group, as did The Boy From New York City by the Ad Libs.

The Manhattan Transfer are clearly a favourite of Musical Director Angela Sharp; many of the songs performed tonight are also covered by various iterations of that group.

Nina Simone is given the nod with My Baby Just Cares for Me featuring polished accompaniment from pianist Emma Knights and percussionist Gabbi Lopa, with Shaw noting Simone’s civil rights history; Dolly Parton’s Jolene was prefaced with an explanation of her work with child literacy through the Imagination Library.

Björk and Regina Spektor also featured with some difficult arrangements, and a lovely version of Samson.

Highlight of the evening was Siren, theme song from Home Fires, while closer I Will Sing of My Country was stunningly haunting; a fitting end to an entertaining evening.

Where: The Prohibition Distillery