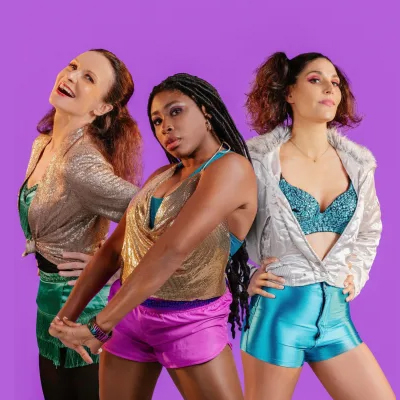 In the world of the 13 year old, there is little that gets in or out. You want what you want, and most people on this planet exist to stop you from getting it.

For the dancers from Pat’s dance Academy in Liverpool, Ohio, in training to make the finals in Florida, the world of the hormone driven 13 year old inexorably begins to unravel around them; friends are lost, passions are ignited, ambitions are thwarted and reality is denied.

The teens are played by a cast that aren’t anywhere near 13; grown women (and one male) of varying ages take up the roles, stepping out in sassy sailor costumes for the opening number, and for the most part, despite the cute red leotards, they just don’t look like dancers. But they could have been, and that nostalgic nod to what might have been is referenced throughout the production.

Mitchell Butel plays dance teacher Pat and is very understated. He does little to inspire either us or the company; one keeps waiting for him to break out, and he just doesn’t.

Playwright Clare Barron has taken on some meaty issues in this play; ambition, expectation, friendship, love, sexuality and broken dreams.

To the fore is sexuality and its concomitant power. Men know this power, and they own it. In Dance Nation, these sexual neophytes are exploring their bodies, trying to understand the changes that are going on, what this means for them, and for their dancing.

Yvette Lee plays teacher’s pet Amina, the best dancer in the company and best friend of Zuzu (Chika Ikogwe). When Pat announces that the competition production will be an homage to Ghandi, everyone expects Amina will get the main dancing role, but it goes to her friend. Zuzu knows she is a good dancer, but she also knows she will never be “sensational”, as she explains in one of the moving soliloquies of the piece. Zuzu comes to understand that this a turning point in her life, and turn she does.

Amina also learns that she needs to own her talent, and in the way of many women, suffers from ‘imposter syndrome’; she doesn’t think she has the skills that she so obviously does, and Pat challenges her to understand this.

Rebecca Massey plays the gentle Maeve, who wants to be an astrophysicist. It helps, as she secretly acknowledges, that she can fly. And one day, she bluntly states, she’ll forget how, and that she ever did.

Ashlee’s monologue is shocking, breathtaking, funny, confronting. As she owns her body, her sexuality, and her explicitly named body parts, she screams, “I am your god. I am your second coming. I am your mother and I’m smarter than you and more attractive than you and better than you at everything that you love and you’re going to get down on your knees and worship my mind, my mind and my body, and I’m gonna be the motherfucking KING of your motherfucking WORLD.”

This is not a production for everyone; the coarse language is really coarse, and some of the concepts are very confronting. But if you think theatre should be confronting, then this is absolutely for you.