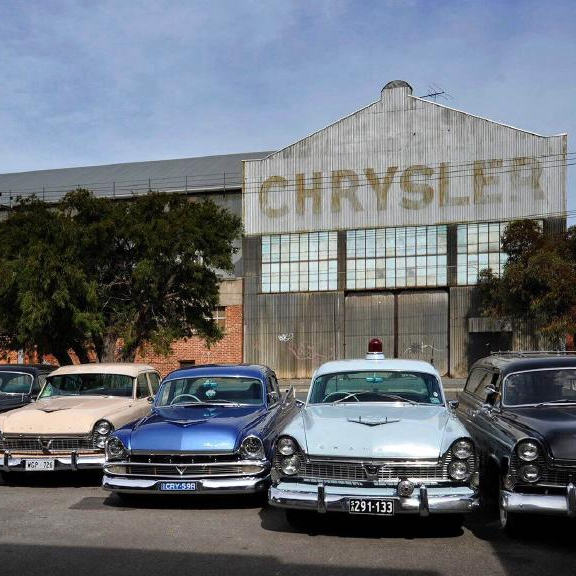 It may seem unusual to be reviewing something outside the traditional realms of the arts, but as an avid motoring enthusiast and classic car buff, I figured why not? It’s an easy extension of the definition of art to include motor cars, especially when you’re talking about vehicles from a bygone era where chrome was king, and some cars were big enough to have their own postcode! The detail that goes into a motor vehicle is certainly an art-form, and the act of restoration a craft.

Design is artistic by its very nature, and the mechanical and engineering prowess required to make some of these vehicles panders to my mathematical and scientific side. If music is your art of choice, I would argue that the sound of a V8 is pure symphony! Plus, there’s an interesting set of sub-cultures that swirl around motoring circles, like rock’n’roll and pinups, especially at an event like the Adelaide Chrysler Festival.

The Fringe and Festival may be over for another year, but it looks like March wasn’t quite ready to shake the ‘Mad’ prefix just yet, with the Adelaide Chrysler Festival squeezing in right at the end and capitalising on the season. It’s obviously a very different kind of festival to the theatrical/musical/comedic ones, but a festival no less and one that pays homage to what I consider the finest form of art, craft and engineering: the motor car.

The Chrysler Festival has been around for many years now, though under a different guise being a single car-show-day with some additional events tagged on. This year, it has expanded to a full festival format that celebrates everything from the lesser of the American and Australian big-three. Lesser in volume perhaps, but not lesser in art and innovation… but I digress. So, what comprises such a festival? For the uninitiated, it generally revolves around a bunch of passionate car people spending countless hours making shiny cars even shinier, driving around Adelaide in their pride and joy, putting on a display of their vehicles, and a plethora of other events and activities surrounding the car mainstays. Like any festival, there are various displays, activities, and usually a musical component too.

Rock’n’roll is a strong ally of motoring culture, and for this year’s Adelaide Chrysler Festival, community radio Coast FM (who has a bit of a penchant for rock’n’roll and tunes of an older vintage) came on board as a supporter and broadcast live from the events.

Having a family focus meant that kids had motoring-themed activities, including one for all the budding mechanics out there who had to correctly install a set of spark-plug leads to a Valiant engine head as quickly as possible! But of course, the key focus of the Festival was motor cars, and there were plenty of them to see! Adelaide was once home to Chrysler Australia, who had the largest manufacturing plant in the southern hemisphere at one point, and were certainly leaders in motoring innovation and engineering.

For me, the Festival kicked off on Friday, when a bunch of ex-Chrysler engineers gave a talk about some of the innovations developed right here in Adelaide, including one of the world’s first production digital emission control systems. Very impressive stuff! The following day centred around a car cruise that took in the southern hills, and had around 250 gleaming Chryslers on display. A vast majority of those were made right here in Adelaide, which makes this event something special for the marque, and the cruise took in one of the old plants used by the car maker back in the ’60s and ’70s. There were plenty of American cars out and about too, which is always great to see, and a contrast to what was happening here in Australia.

The cruise event culminated in the western ’burbs, and given the fine weather we have this year, fans of other car makers also out cruising joined in for some friendly banter, turning up in Holdens, Camaros, and even the odd Mustang.

If you’ve never experienced such an event, think of it like The Fast and The Furious, but without the racing and the tension (or criminal activity!). It’s pretty good fun!

The headline act of the festival was the ‘All Chrysler Day show and shine’, where some 200-odd cars were out on display, again showcasing a lot of what was produced right here in Adelaide. There were all kinds of Valiants, American Dodges, Plymouths, and even a Hilman and a Galant or two (including mine!). The theme of the event was ‘Then and Now’, so the old Valiant and American muscle was contrasted against what Chrysler is making now, with people bringing out some of their more recent Chrysler cars, including some that have been imported from the States, like a very impressive Dodge Challenger, currently the most powerful production car in the world!

The weather may have been hot and stinking humid, but it wasn’t enough to dampen any spirits (only underpants!), and a great day was had by all! I loved having my two Valiants out on show. If you’ve never been to a car show before, give it a go as you may discover you’ll have a really great time!