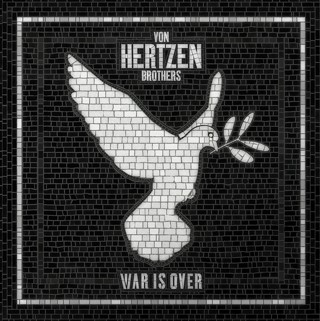 Finland is an interesting place. It’s an extreme kind of country, with great, extreme people to match. It’s no wonder they punch above their weight with rally and formula one drivers, and the Russians were never able to invade. Along with extreme sports stars, Finland is famous for some extreme music acts, and the Von Hertzen Brothers (who actually are brothers) is one such band that are able to fully flex their musical prowess playing progressive metal.

From the opening sounds of their latest album War Is Over, you know you’re in for something special. There’s all the signatures necessary for a good progressive album, including complex keyboards, soaring virtuosic guitars, shredding, thumping drums, complex time signatures, and more layers than a homemade lasagne, but more than other progressive releases, this one has a touch of the extreme that only the Finns could bring to an album.

Like neighbouring Swedish metal, there’s something almost mythical or ancient about the music here. It’s not necessarily that its more virtuosic or more metal than say a Dream Theatre album, but there’s a certain quality here that the Brothers have brought to the table.

Like all good progressive albums, you’re taken on a journey, and there’s a definite sense of cohesiveness throughout the album, yet interestingly, many tunes conform to a more rock time limit, and all stand well on their own too, which for a progressive album, is an interesting dimension.

Don’t get me wrong, there are 12 and 8 minute epics bookending the album here too, but perhaps the meat in the sandwich helps to make this more accessible for a less-than-progressive head, which for the longevity of the musical style, could be a very good thing! Either way, the Von Hertzen Brothers have done well with War Is Over, making something that is a great balance of light and shade, of gentle and extreme, and something that fans of progressive metal and casual rock will equally enjoy.