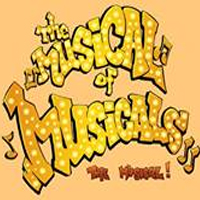 Musicals: you either love ‘em or you hate ‘em. And this is the exact reason why the Musical of Musicals is among the rarest of gems – it smiles down on camps from both sides of the fence.

A satirical tribute to musical theatre’s big guns, including Rodgers and Hammerstein, Stephen Sondheim, Jerry Herman, Andrew Lloyd Webber and Kander and Ebb, this production simultaneously endears the devotees while wooing the disinclined through comedic prowess.

The novelty of The Musical of Musicals is that the basic plot and character names for all five acts are exactly the same: June (Hannah Ley) is having trouble paying her rent, and is being threatened by her evil landlord Jitter (Jarrad West). Her friend Abbey (Louiza Blomfield) gives some sound advice, and then her boyfriend Michael (Adrian Flor) comes along to save the day. However, beyond that limited scope lays a cosmos of hilarity.

Backed by accomplished Musial Director, Nicholas Griffin, on piano and narrated by co-director, Duncan Driver, each act was essentially a campy mashup of a given theatre composer(s)’s body of work. This made it highly entertaining simply for the challenge of picking out which musical they were sending up at any given time – especially when the references were fleeting.

However, it was the outstanding talent of the four leads and the wacky chemistry between them that made this show so very enjoyable. All had exceptional vocal abilities that combined with sharp choreography (by Ley and West) and pure showmanship to create a force of nature. Furthermore, their absurd, uninhibited and very polished style of comedy and priceless one-liners ensured a steady stream of laughter from the audience.

Clearly a multi-talented cast, Blomfeld was also charged with the stage design, which resembled a graveyard where musical theatre props go to die.  Chaotic, colourful, yet utilitarian, it allowed for freedom of movement and the rapid costumes changes in quite modest amount of space and was complemented by some clever lighting design by Kelly McGannon.

For those who have entered into a relationship with an ardent musical theatre buff, and don’t see the sense in it, this is a very good chance for you to share the experience with your loved one in a safe environment. Yes, you may get more out of it if you understand the references, however, even taken out of context it’s still one helluva spectacle.

Where: The Canberra Theatre Centre